Ukraine’s Kraz to launch SKD assembly of vehicles in Bolivia 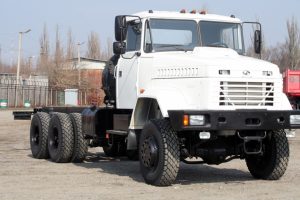 Ukrainian vehicle maker Kraz is planning to launch production in Bolivia from semi-knocked down (SKD) imports according to representatives at the company. The plant will assemble trucks, passenger vehicles and vehicles for the military. The project is currently in the final stage of negotiations according to Kraz.

During bilateral talks between the representatives of the company and the country’s authorities, Bolivia noted that SKD assembly of heavy trucks is a key project and related to plans for the industrialisation of the country and the development of technologies, as outlined by president Evo Morales.

In a joint press release Bolivian representatives noted that production of Kraz trucks would meet demand in the domestic market as well as meeting the needs of wider South America for heavy equipment.

"Given the positive experience of creating assembly plants in Vietnam and Cuba, as well as the high competence of Kraz building SKDs abroad, both parties believe in the successful implementation of this project," said the statement.

AvtoKraz produces 33 basic models and more than 260 modified vehicles in its home market, vehicles that are used in almost all sectors of the economy and the armed forces.

This is not the first expansion for AutoKraz in South America. As noted the company already has an assembly plant in Cuba and at the end of August signed a contract with the Ministry of Construction there for the supply of sixty kits to Konstruimport for vehicle upgrades as part of its long-term cooperation in the country, which began in 2008.

The company is also currently engaged in the creation of joint ventures with local companies building assembly plants in Ecuador and Argentina. Those are due to be launched in the coming months and by the end of 2014 should be producing 50 trucks each. Capacity for SKD production in Bolivia will be several times higher.

Representatives of the company said that the current project is the part of its programme for expansion in the most promising and developing foreign markets. Among the priority regions for launching exports the company identified Asia, Africa, Latin America and the Middle East. In total AutoKraz is present in 60 countries around the world.

Between January and July 2014 the company produced 610 vehicles, up 44.2% over the same period of 2013, which makes it the most successful Ukrainian carmaker given its relative immunity from the current crisis in the country.