US tariffs ‘of limited long-term impact’ on Mexico, says WWL 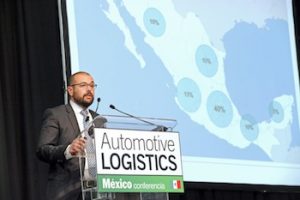 Export tariffs to the US will be of limited long-term impact on Mexico’s automotive sector despite some short- to medium-term concerns, the head of Wallenius Wilhelmsen Logistics (WWL) in Mexico has suggested.

Commenting on an analysis of the Mexican market produced by WWL recently, including the threat of tariffs being imposed by new US president Donald Trump, Mexican CEO Roberto Zavala said: “We hope that trade between Mexico and the rest of North America can develop positively during 2017 and into the future.”

WWL is currently waiting to see whether Fiat Chrysler will partially end production of some vehicles in Mexico; the FCA business is a key component of the shipping line’s operations.

FCA recently warned that it could pull out of Mexico altogether, if US tariffs were set too high.

WWL’s analysis conceded that the recent decision by Ford not to proceed with a new $1.6 billion plant at San Luis Potosi was a major blow, but suggested existing plants would take on some of the work it would have carried out.

WWL has itself recently announced the opening of a vehicle-processing centre at Audi’s plant in San José Chiapa to handle dispatch of vehicles.

Elsewhere, Toyota has said it will go ahead with a new plant of its own, due to become operational in 2019.

Mexican production of vehicles is still expected to continue into a sixth year of continuous growth in 2017. “In spite of the recent political uncertainties and the scaling back of operations of some automotive manufacturers, we still have great hopes for Mexico and in the making of cars in that country,” commented WWL analyst Erik Solum in the report.

The report suggested the number of vehicles exported from Mexico to both Canada and the USA could even rise significantly. This, in turn, would add extra pressure on export capacity, particularly in the short-sea shipping sector, it noted.

Despite his comments about the limited impact of tariffs, Zavala acknowledged that the existing free trade agreement with the US had been a key component in the development of the automotive sector in Mexico so far.

“Of approximately 3.4m cars produced in Mexico in 2015, the vast majority were exported, of which 2.3m went to either the US or Canada,” he noted, adding that this resulted mainly from the opening of five new production plants in Mexico over the last few years. Their existence is one of the reasons why WWL has such a strong presence within Mexico, where more than half its business is generated by the automotive sector, said Zavala.

“WWL has a presence in production plants, vehicle distribution installations and in the main ports throughout Mexico, and the automotive industry channels almost all of its volume via rail between Mexico and the US,” he said. “WWL also plays a part in maritime transport, which should increase if, as we hope, Mexican exports continue to grow.”

The number of light vehicles produced in Mexico for Canada and the US is still expected to cross the 3m mark in 2020. European exports are also expected to increase significantly.

Mexico’s developing role on the world automotive stage will be among the key issues discussed at the Automotive Logistics Mexico conference in Mexico City, which runs from January 31st to February 2nd.