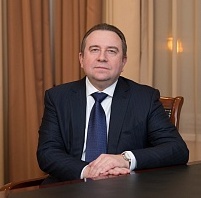 Currently there are no such services in Russia but Rakhmanov said this could change in the near future once USC starts building the vessels and given policy affecting the transport of vehicles by road. The company has estimated that the cost of delivering vehicles via the Volga and Kama rivers was competitive with the truck mode.

“We were estimating the prices for the [delivery of finished vehicles on] particular parts of the river Kama, where there is a large cargo turnover,” Rakhmanov told Russian news agency Tass. “In fact, the most reasonable solution [for ro-ro transport by river] would be on the route between two production complexes, so in particular the shipment of finished vehicles from St Petersburg to the Volga region would be very convenient,” he added.

Rakhmanov also suggested that the introduction of the Platon toll collecting system on the federal highways and recent driver regulations limiting working hours in Russia could help to move more finished vehicle volumes on to rivers in Russia.

At the end of last year the Russian government confirmed plans to double the charges on trucks of 12 tonnes gross vehicle weight (GVW) and more under its Platon Electronic Toll Collection scheme.

Rakhmanov’s points were countered to some extent by Mikhail Burmistrov, the head of the consulting agency Infoline-Analytics, who told Russian news source Vedomosti that barges would not be useful for logistics providers operating within the country’s borders. Burmistrov said delivery by road and railway was faster and much more cost-effective.

However, he did add that new barges could be used for the export of finished vehicles from Russian assembly plants to countries outside the Commonwealth of Independent States (CIS). More specifically, Burmistrov said that if the vessels were suitable for both river and ocean transport, or worked as part of a multimodal chain delivering the cars for reloading aboard ocean-going vessels, it could be a viable option for vehicle exports.

He acknowledged that finished vehicle delivery by barge already used in Europe and China.

Burmistrov went on to estimate that the cost of a single barge would be 300m rubles ($5m), which would may the period over which the investment was recovered per vessel around around 10 years, or even 15 years if demand for the barges was small. He concluded that any such project would require state aid to bring it to fruition.

Most of Russia’s logistics providers and OEMs have refrained from commenting on USC’s plans and whether ro-ro shipment by river could be viable. GAZ, Kamaz and Renault reportedly expressed readiness to consider using the mode, although they pointed to several challenges, particularly the fact that Russia’s climate would prevent deliveries being able to be made all year round. The Volga freezes along most of its length for three months out of the year usually, and the Kama can freeze for even longer in places.