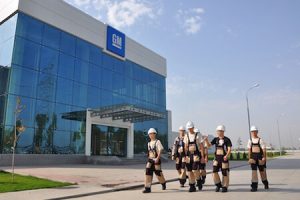 Uzbek state-owned vehicle-maker, UzAvtosanoat, is looking to buy GM’s remaining 10% stake in the joint venture it has with the US carmaker – GM Uzbekistan.

The buyout is expected to be complete by the end of the year and follows UzAvtosanoat increasing its original 75% stake in the joint venture to 85% – though exactly when this happened remains unclear.

In a press conference at the end of May, Umidjan Salimov, chairman of UzAvtosanoat, said that “part of the shares that previously belonged to GM had already been acquired [by UzAvtosanoat] and the rest would be sold out by the end of 2018”.

In addition to buying out GM Uzbekistan, UzAvtosanoat plans to buy all the shares in GM Powertrain Uzbekistan – another joint venture between the government and the US carmaker that makes engines, in which GM has a 70% stake. Salimov said negotiations over this were in their final stages.

Once both deals are completed, GM Uzbekistan will change its name, removing any reference to GM, but the carmaker will remain a technical consultant on production projects, according to Salimov. UzAvtosanoat will also hold the right to release vehicles under the Chevrolet brand.

GM Uzbekistan currently has the capacity to produce 250,000 vehicles a year. In the first quarter of 2018, the joint venture produced 51,000 vehicles, up by more than 26% compared to the same quarter the previous year. During the same period, GM Powertrain Uzbekistan increased the production of engines by 38% to 40,780 units.

It is not clear how the buyout will affect expansion plans previously announced by GM Uzbekistan. The company signed an investment agreement to build a finished vehicle assembly plant in Kyrgyzstan and was harbouring plans to launch similar facilities in Russia and Kazakhstan. There were reports that GM Uzbekistan was considering production of Ravon cars at the GM plant in St Petersburg, where production was shut down in 2014.

No localisation, no useSalimov’s announcement about the takeover came shortly after sharp criticism from Uzbek president Shavkat Mirziyoyev. Speaking during a press conference on May 21, Mirziyoyev claimed the GM Uzbekistan plant was operating only “for the sake of appearance” and that there was “not use from it”.

Mirziyoyev claimed that despite receiving various incentives, including tax breaks, over the past 27 years, the plant still had not achieved the proper localisation rate. GM Uzbekistan had not created new jobs, so the government had decided to direct state support to the other industries, according to Mirziyoyev.

There is no official information about the financial performance of GM Uzbekistan, but according to Mirziyoyev “it is not generating profit any longer”.