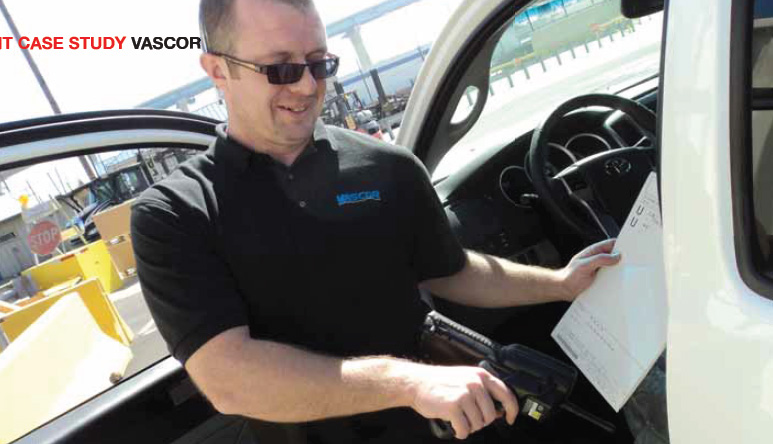 When Toyota opened its first US plant in Kentucky, a joint venture was formed between APL Logistics and Fujitrans to handle logistics. Today, Vascor–celebrating its 25th anniversary this year–operates across North America, working primarily for Toyota, Chrysler, Hino Motor Truck, and GM, for which it handles inspection work. It also controls claims processing for Ford and lists some smaller customers, including railways, in its client base.

Although Vascor began by providing inbound logistics to Toyota, it added outbound when it was asked to control inspection. Now it receives and stores vehicles and arranges onward delivery to dealerships or other locations. To control such a wide ranging list of activities the company relies heavily on good IT systems, most of them written in-house. “When we started, there were no commercial systems on the market for finished vehicles and although inbound logistics was more mature, there were few good systems for that either,” says Lee Jones, vice-president of IT with responsibility for emerging solutions. “As our service offering grew, our IT requirements expanded, but we kept writing our own software. The one exception is Oracle Transportation Management (OTM), which we use for inbound transport control.” Vascor’s software, known as V-Scope, has to be flexible. “Every customer operates a little bit differently,” Jones points out. “It is a challenge to provide sufficient visibility and we have to integrate V-Scope with OEM software.”

The outbound system starts with electronic notification of what vehicles are coming, when, and by what what mode. Once a vehicle arrives at a Vascor depot, the barcode, which contains the VIN number, destination and route, is read. Vascor uses radio frequency by choice, but not RFID, which is only used at Toyota yards in Mexico. If one of Vascor’s many temporary yards is being used then cellular technology, rather than radio frequency, powers the barcode readers. “We have a lot of land on lease,” Jones explains. “If we need an overflow facility, we can get the labour, security and other requirements up and running within 24 hours. But because they are temporary, we aren’t going to invest in RFID for these locations.” At the Mexican yards, Vascor applies RFID tags to vehicles but they are a government-issue tag called Repuve. “We do the physical installation of these tags on the vehicle but we do not use this tag to track vehicles. These tags are for the Mexican government’s use,” says Jones. A ‘pre-bay’ module enables Vascor to look at the VIN, routing and yard configuration in relation to each vehicle.

Employees know whether any particular unit will be trucked or railed to a destination or if it will be stored until a final destination and routing has been determined. “The pre-bay module can also identify in which bay to put an incoming vehicle, so that it can also identify the location of any unit when we need to get it ready for onward carriage,” Jones explains. “The system will tell us which vehicles are available for each route and where they are.” Each railway or road haulier is allocated a different section of the yard. As the loads are prepared, the software looks at the load lines to see how much capacity there is for that route and it allocates vehicles to a rail wagon or truck load lane and puts the relevant units in a staging area to await collection.

In most operations Vascor does not determine what vehicles are loaded onto a wagon or truck. The OEM or the trucking company does this based on the vehicles that are allocated and available. “The exception to this is Hino,” says Jones. “Vascor performs the task of determining what vehicles are put on a load for dispatch.” In Mexico, Vascor manages Toyota de Mexico’s entire outbound chain. Its systems are integrated at Toyota and at the carriers to provide full visibility of all vehicles inbound to Mexico by sea from Japan or other global locations, rail from the US and Canada and from Mexican plants. “We track these vehicles through all modes of transportation and holding yards, all the way to the dealers,” says Jones. “We have recently developed a dealer portal so dealers can see vehicle inventories flowing to them, [the] current location of the vehicle, and an ETA for delivery.”

Inspecting vehicles’ progress
Inspection is still an important part of Vascor’s work. In some cases, vehicles are inspected at the end of the production line, before they leave the plant. These units won’t be inspected again until Vascor releases them from the yard. When the vehicle enters Vascor’s premises, it will see if any damage has already been identified by scanning the VIN number. Truck drivers will inspect any vehicle before it is loaded to ensure there is no damage when it enters their care. Minor damage can be repaired at the dealership–such as by a paint touch-up–but if the damage is too severe, the vehicle will be pulled out of line for repair and then put back into that OEM’s pool for delivery, sale at auction or other means of sale or disposal. “If a scratch is shallow and short, it can be repaired,” Jones says. “If it is too severe, there are legal restrictions governing whether the car can be sold as new or not.

Then the claims process between ourselves and the OEM is initiated, but this is a very rare occurrence.” V-Scope’s transport management module controls the carriage of vehicles. Vascor sends the vehicle allocation to the carrier, which in turn sends back information on what truck is coming for which units. When the truck is loaded up, it is scanned at the outgate so the company can be sure the load matches the list of vehicles meant to be carried. Again, for Mexican operations, and those of Hino, Vascor has more responsibility. “We do the full supply chain tracking for them,” Jones says. “We obtain an EDI transmission telling us where a vehicle is at each step of the journey and when it gets to the dealer’s yard. If a truck leaves with 12 vehicles for four dealers, we receive a notification every time a vehicle is dropped off and if there’s a delay, we receive a new estimated time of arrival. 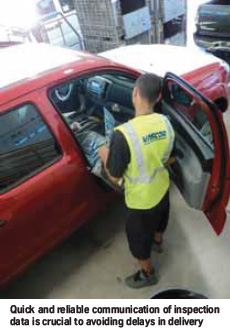 The truck driver contacts his depot, which then contacts us. However, the system knows when the truck is meant to [be delivered]. If it doesn’t, we get a status update and can find out what went wrong.” This sort of information is vital, not just for the efficient operation of Vascor’s operations, but also to supply intelligence to its customers. “We can watch for bottlenecks in the supply chain and help to improve vehicle flow and streamline the supply chain,” says Jones. “The data we collect and provide to our customers identifies where any vehicle was at any particular point in time, allowing the OEM to check things like average dwell time across the supply chain. “But we employ our own data analysts and can ‘peel the onion’ to see where any anomalies lie in the logistics process. For example, we can see if a capacity shortage at the carrier has caused a delay. Most of the time it comes down to communication.

There are so many parties involved in a finished vehicle movement that if the right information is not passed to the right person at the right time, there will be hold-ups. If the inspection company is not notified that a vehicle is ready for inspection, it won’t carry out this task. If the OEM does not receive the inspection report, it won’t release the vehicle to the carrier. The knock-on effect could lead to a day or even two days’ delay.”

Inbound intelligence
Vascor uses three inbound systems; two V-Scope modules and OTM. The OEM sends Vascor its order, listing part number, quantity, weight, volume, etc. These orders are then used to build the transport order. Once the routing is complete, Vascor handles all the communications with the supplier: when a firm order has been confirmed, Vascor relays the OEM order to the supplier, which tells them what part to build, when it will be collected and by which carrier. “OTM is used to optimise the route planning–where the vehicle has to be to collect the load, and when,” says Jones. “It also enables us to track and trace each order, and to complete settlement of the freight charges.” OTM has the potential to be used for finished vehicles, but there are no plans to do so just yet. However, Vascor is considering expanding to India. V-Scope, which has helped Vascor maintain an efficient and cost-effective service, will likely form the backbone of any new operation, even if it is on the other side of the world.