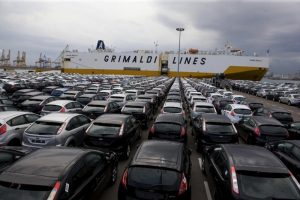 The Spanish ports of Valencia and Sagunto, which are both administered by Valencia port authority are seeing a significant uptick in the volume of finished vehicle traffic they are handling, helped largely by the expansion of activity by Ford at its plant in nearby Almussafes.

In recently released figures, the port of Sagunto, which is administered by Valencia port authority, managed to grow its finished vehicles' business by more than 202% in the first two months of this year, registering throughput of 26,688 units. This is a significant recovery compared to 2014 as a whole, when the port reported just 57,779 units handled, a drop of almost 47% on the previous year.

In January of this year, traffic amounted to 10,517 vehicles, equivalent to growth of more than 67%, before them jumping dramatically in February. Growth is expected to continue throughout the year.

The recovery is due to two factors. Firstly, to a policy of diversification followed by Valencia port authority, which has seen Grimaldi Lines, which carries the lion's share of new vehicles traffic in Valencia, also commence operations in Sagunto.

Secondly, the announcement by Ford at the beginning of the year that it would begin channelling 100,000 export units through the port. The presence of Grimaldi at Sagunto was a major factor in the move there by Ford.

Separately, but also at Sagunto, Transcoma group subsidiary Transcoma Shipping has signed an open-ended agreement with the Euro Marine Logistics (EML) shipping line to begin operations at the port. One of the company's ro-ro vessels will be deployed on a 15-day rotation out of Sagunto, from where it will steam to Tangier to pick up export vehicles, which it will then distribute at the ports of Le Havre (France), Zeebrugge (Belgium) and Newcastle (UK).

Ford expands at Valencia port
Meanwhile, Ford has also expanded its activity at the adjacent port of Valencia. The carmaker has requested a 50,000 sq.m concession on the Dique del Este quay, currently home to Valencia Terminal Europa, which handles the majority of finished vehicles passing through the port.

Given that the port authority per se is not specifically seeking a concessionaire, it has given other companies interested in using the same space to put in their own request by June 7 this year.

Since 1976, Ford, which has a local manufacturing base at Almussafes has operated at the port under a rolling series of contracts, which have been renewed approximately every three years. However, the new concession would be for a period of seven years, during which the company expects to handle approximately 190,000 export vehicles annually.

According to the last set of official figures issued by Anfac, the automotive manufacturers' association, in 2013, Ford handled 186,000 finished vehicles at the port of Valencia, which also includes outlets at both Sagunto port to the north and Gandia port to the south.

At the end of 2014, Ford announced that it had signed a contract with Noatum Terminal Polivalente Sagunto to use its facilities in Sagunto harbour to export 100,000 finished vehicles. With the 190,000 units it expects to process through Valencia it brings the total figure to 290,000 units and suggests output will be 50% higher than the 2013 figure.

Crucially, by replacing its series of rolling agreements with a fixed-period concession Ford appears to be contemplating using Valencia to potentially handle both exports and imports. Local sources point out that, the latter would require a certain level of investment to be made in the terminal and that this appears to have shaped Ford's policy towards the port.

In this respect, there is a possibility that the company will construct a small work shop on site to undertake modifications to vehicles prior to despatch to distributors.

Read more about Ford’s activity at Valencia in the next edition of Automotive Logistics magazine.