Vehicle exports on the increase in Spain 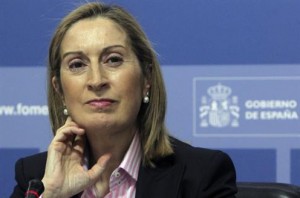 According to the Spanish government the country's ports will handle a total of 2.5m finished vehicles in 2014, up 7% over 2013. The minister for public works, Ana Pastor Julián (left), said that next year ports would handle 2.7m units, equivalent to an increase of 8%.

In the first seven months of 2014, automotive exports from Spain increased by 6.8%, accounting for 15.2% of all Spanish exports, and making it the country's biggest export sector overall. Automotive imports also increased, up 23.3%.

In terms of export markets, those to the European Union (EU) and the Eurozone in particular were up 4.5% and 4.8% respectively, with those to Germany (7%), Portugal (8.7%) and Benelux (12.7%) showing the strongest growth.

Significantly, exports beyond the EU, which account for 36.4% of the total, were down 3% year-on-year, due to a slowdown in several emerging markets. Spain has also been negatively affected by the appreciation of the Euro in the first few months of the year, making many exports more expensive.