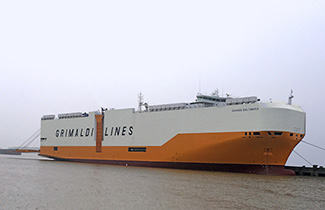 Automotive traffic through the Spanish port of Sagunto, administered by Valenciaport, has continued to grow significantly so far this year.

The upswing in finished vehicle traffic was down to both Ford and Toyota, as well as the PSA plant at Figueruelas, near Zaragoza, which has begun to build the Citroën C3 Aircross, many of which are exported.

Currently, 560,000 sq.m of land at the port are given over to the automotive industry.

On October 10th, Sagunto welcomed the largest car carrier in its history. Grande Baltimora (pictured), which belongs to Grimaldi, can hold 6,500 cars and currently connects Antwerp, Sagunto, Savona, Livorno, Civitavecchia and Gioia Tauro in Europe with Halifax, New York, Baltimore and Veracruz in North America. Its deployment effectively doubles the previous capacity on the same route. Two further ships of the same dimensions are eventually to be incorporated into this service.