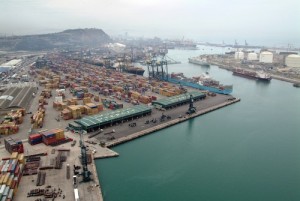 Automotive traffic at Spanish ports, which has been particularly badly hit by the country's economic difficulties in recent years, is finally beginning to show signs of exceeding previous growth. The ports of Barcelona and Santander have both reported healthy figures for the first five months of 2014.

At the Mediterranean port of Barcelona, port authority president Mr Sixte Cambra noted that for the first five months of this year automotive traffic grew by 5% compared to 2013, with imports up 10% and exports up 14%. This latter figure is significant, given that Barcelona is now handling more outbound finished vehicles than it did before the start of the crisis.

To reflect the growing need to provide additional space for vehicles, the port authority has made available a further 200,000 sq.m area on Princep d'Espanya Quay. The land, which was formally a container terminal operated by Tercat (as pictured), is equipped with three berths. Significantly, this new operating area is close to the Darsena Sur area of the port, where finished vehicles are currently handled either by Autoterminal or Setram.

The Tercat container terminal has since been moved to a new area at El Prat, freeing up this zone in the inner port.

Barcelona now offers six berths capable of accommodating finished vehicles, of which four allow operations with deep-sea vessels. According to the port authority, this expansion of capacity will allow car carriers to be handled as part of the normal working day, which should help avoid additional costs.

The northern Spanish port of Santander also finds itself with an affluence of finished vehicle traffic. Figures for the first five months of 2014 suggest that the port is on course to beat its all time record – 325,164 units – established in 2005.

Comparing the two periods, 2014 is showing growth of just below 26%. Indeed, the number of units already having passed through the port this year is already a record.