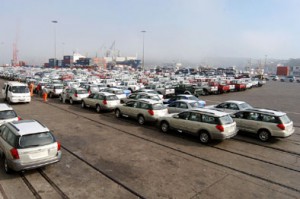 On March 12, importers of finished vehicles at the Chilean Port of San Antonio's Puerto Central used police protection to begin retrieving more than 8,000 vehicles that have been stuck at the facility since strikes closed the port on February 21.

The first batch of 135 vehicles were moved at night, with a further 1,000 following during the day, but still leaving more than 7,400 units needing to be retrieved. However, this freeing up of space allowed one of four waiting vessels to move onto the automotive berth to discharge yet further consignments.

The managing director of Puerto Central, Rodrigo Olea, pointed out that, under normal circumstances, 12 road transporters could be despatched every hour, shifting consignments of up to 120 cars. However, the head of the trade union covering road movements, Juan Araya, guaranteed that a fleet of 50 road transporters would be used, making three return trips a day, resulting in 1200-1500 finished vehicles being taken out of the port.

“We have significant volumes that we haven't been able to pick up, which has directly affected that stock we need to satisfy our customers; sales of around 1,000 units have been put at risk,” said a spokesperson for General Motors.

The Chilean National Automotive Association (ANAC) also noted that shipping companies were having to hold car carrying vessels at anchor, given that consignments already on shore could not be accessed.

Meanwhile, the president of the Automotive Chamber of Commerce, Carlos Dumay, noted that there had been ongoing communication with customers to explain the reason for the delay in getting new vehicles to them.

Rodrigo Olea stressed that activities in the port were slowly getting back to normal, although some striking dockers were still resorting to threats of violence and direct action.