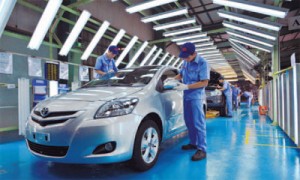 Vietnam’s Ministry of Industry and Trade has decided to keep in place a controversial policy allowing only the authorised dealers of foreign carmakers to import vehicles. The policy, which first became mandatory in June 2011 and was due to expire this month, applies to all vehicles with fewer than nine seats.

The policy was put in place to ensure that vehicle aftersales services, including warranty and maintenance work, were up to manufacturers’ standards. Without it, a whole variety of companies would have been able to import vehicles in addition to each manufacturer’s single official distributor, which, it was feared, would make it difficult to maintain high service standards.

Deputy head of the ministry’s import-export department, Trần Thanh Hải, defended the decision to keep the regulation in place, suggesting that revoking it would have had a negative impact on the domestic automotive market.

Hải said lifting the regulation would have halted the national auto industry’s development planning, which has already been approved by the prime minister and includes a project to boost development of the domestic assembly business and vehicle manufacturing there. He added that removing the regulation would have accelerated vehicle imports, generating more traffic jams and urban environmental pollution.

“It’s not that the ministry does not want to remove difficulties for businesses, but the lifting of the regulation [would] likely cause unhealthy competition in the market, like it was before 2011 when [the] Circular 20 [legislation] had not yet been issued," he said.

The decision has been strongly opposed by the country’s Chamber of Commerce and Industry (VCCI), which said the policy gave authorised dealers an unfair advantage. Other businesses wishing to sell imported vehicles had to buy them first from such dealers, it pointed out, promoting unfair competition and leading to higher prices for consumers.

The move to retain the policy was backed by the Vietnam Automobile Manufacturers’ Association, however, as well as the European Chamber of Commerce in Vietnam, the German Business Association and the Vietnam Business Forum. They have argued that removing the requirement would negatively affect the domestic automobile industry, prompting potential import fraud and resulting in tax losses, as well as restricting the rights of domestic consumers.

The Vietnamese market for imported vehicles is expected to rise in the near future, following a reduction to zero in 2018 on all import tariffs applying to ASEAN member countries. Vietnam has also reduced its special consumption tax on vehicles with small engine displacement as of July 1st this year.