Volkswagen to establish business in Ethiopia

German carmaker Volkswagen has signed a Memorandum of Understanding (MoU) with the Ethiopian government to establish its automotive business in the African country. 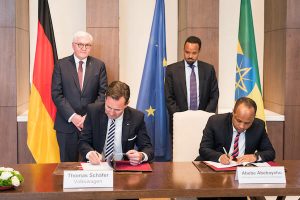 Thomas Schaefer, head of Volkswagen Sub-Saharan Africa, signing the MoU with Abebe Abebayehu, commissioner of the Ethiopian Investment Commission, in Addis Ababa. With them are the president of the Federal Republic of Germany, Frank-Walter Steinmeier, and the Ethiopian Minister of Finance, Ahmed Shide

The MoU has four goals: to set up a vehicle assembly plant, localise automotive components, introduce mobility concepts such as app-based car sharing and ride hailing, and open a training centre. For the training centre, Volkswagen said it would work closely with Ethiopia’s higher education and training institutions for skills development and capacity building of local talent.

Thomas Schaefer, who heads Volkswagen’s sub-Saharan Africa region, said: “As one of the [world’s] fastest growing economies and with the second highest population in the continent, Ethiopia is an ideal country to advance our sub-Saharan Africa development strategy.

“Additionally, Volkswagen intends on tapping into existing expertise and strategic resources in Ethiopia to help to establish a thriving automotive components industry.”

In the past decade, Ethiopia’s growth has been more than 8%, while at 104m it is second only to Nigeria at 182m in terms of number of inhabitants. A further attraction from VW’s perspective is that Ethiopia is a priority country for Germany under the G20’s ‘Compact with Africa’ initiative.

Ethiopia is the third sub-Saharan country to sign an MoU with Volkswagen, following Ghana and Nigeria last August. In Ghana, the company plans to set up a vehicle assembly plant and conduct a feasibility study into integrated mobility, while in Nigeria, VW has implemented a phased approach to vehicle assembly with the long-term aim of establishing the country as an automotive hub in West Africa.

The group has been manufacturing vehicles in South Africa since 1951. It also has assembly operations in Algeria, Kenya and Rwanda.

Under the Transform 2025+ strategy, VW is strengthening its presence in regions and focusing on new, up-and-coming markets, with sub-Saharan Africa playing an increasingly important role. Although the African automotive market is comparatively small at present, the region has bright prospects of developing into a growth market, said the company.

Largely confined to South Africa in the past, vehicle assembly is beginning to spread to other African countries, with automotive industry-friendly infrastructure development taking place elsewhere on the continent.

The French PSA group, through its Opel and Peugeot brands, is developing semi-knockdown (SKD) kit operations in Namibia, while Japan’s Nissan has signed an MoU with Ghana’s government to establish an automotive manufacturing industry in the country.