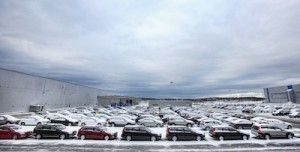 The Volvo Car Group has announced that it will build its first manufacturing plant in the US, in a bid to become a truly global carmaker. In a statement Volvo indicated that it would spend around $500m, and would eventually produce at least 100,000 cars per year for both the US and export markets.

While the exact location has not yet been determined, Geely-owned Volvo Cars has drawn up a shortlist of potential locations. Once the new manufacturing facility has been established, Volvo will have an industrial footprint on all three continents: its current assembly plants are located near Gothenburg, Sweden and Ghent Belgium, as well as in Chengdu and Daqing, China.

Until recently, the US had been Volvo Cars’ largest sales market, but volumes have slipped in recent years, falling to 56,371 in 2014 compared to more than 100,000 a decade ago. However, planned major model launches in the US aim to restore sales there. According to the company, the new plant will help it meet and exceed its volume target in the US, where it has a medium-term ambition to return to 100,000 cars per year in the US.

"Setting up a new US production facility is long term strategic decision. The new factory is expected to start up in 2018 so we need to look beyond 2020 in the business case. A strong presence in the US is crucial to our global growth plans and local manufacturing will secure sustainable profitability independent of fluctuations in exchange rates as labour costs will be in USD and a large share of components will be sourced locally," a spokesperson told Automotive Logistics

The company said that the new announcement highlights its long-term commitment to the US market. Håkan Samuelsson, chief executive and president, told Reuters that the choice of the US as a plant location over Mexico, as is planned by premium OEM rivals BMW, Audi and Mercedes-Benz, demonstrated this commitment. Production is expected to begin in 2018. "Building a factory is part of our global strategy, with Volvo now having a plant on the three key continents we serve. The US was chosen over Mexico thanks to savings in logistics costs," the spokesperson said.

“Volvo Cars cannot claim to be a true global car maker without an industrial presence in the US. Today, we became that,” said Samuelsson. “The US is an absolutely crucial part of our global transformation and today’s announcement makes it perfectly clear that Volvo is in the US to stay.”

Building a US plant also appears to a strategy intended to improve logistics and decrease vehicle lead times. In a statement, Volvo Cars said that it would introduce more build-to-order vehicle options for customers. "With local production we will come closer to the end customer which enables us to offer build-to-order which can be a competitive advantage," the spokesperson said. Volvo also said it will be able to serve both the US and export markets, along with limiting the impact of currency variations. All of Volvo’s cars to the US are currently imported from Europe.

The move towards more built-to-order vehicles, as well as more regional production, is part of a wider supply chain strategy for Volvo Cars. At the Automotive Logistics Europe conference in Bonn recently, Geert Bruyneel, vice-president, supplier quality and logistics, Volvo Car referenced the OEM’s build-to-order approach. “We need to create a continuous, seamless flow, without interruption, with perfect sequence, high build-to-order, and to have high resource efficiency,” he said.

The spokesperson told Automotive Logistics, "The new plant will build vehicles on our SPA platform, which is the base of our 2016 XC90 and all our vehicles moving forward. It is too early to say what models will be manufactured in the US, but the XC90 will start arriving in dealers this spring." The XC90 will be launched in the US from its factory in Sweden. A version of this model is also built at the carmaker’s plant in Daqing for the Chinese market. If the new US plant also begins to manufacture the model, it could become a three-continent production strategy, which would mean more global sourcing and shared suppliers across all three regions, something which seems likely given the carmaker’s stated aims of building more vehicles on modular production platforms.

Last year, Samuelsson also said that Volvo would consider exporting vehicles to the US from China, a strategy which would further emphasise the carmaker’s shift to a more global production and sourcing strategy, even as it localises its high volume vehicles in each of its major regions.

Last week, Volvo Cars announced that it is restructuring and simplifying its global organisation with the creation of three main regions for the Americas, Asia and Europe, Middle East and Africa (EMEA). The OEM said that there will be more local responsibility in each region. The Americas region will consist of North and South America, and be led by Lex Kerssemakers, the former senior vice-president of product strategy and vehicle line management.

In recent years, Volvo Cars has also made significant changes to its logistics management strategy, including the creation of global inbound and outbound logistics operations and procurement teams, and global IT systems. Previously, Volvo Cars’ logistics had been managed by Volvo Group Logistics Services (previously called Volvo Logistics), which is the third party logistics arm of the commercial vehicle manufacturer Volvo Group, which owned Volvo Cars until 1999.