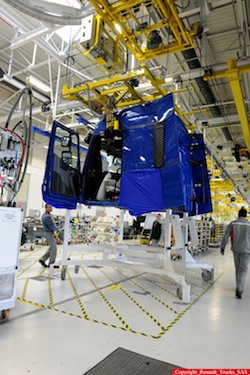 Production of the new generation of Renault Trucks for the Turkish market will now be carried out at Volvo Truck’s production plant in Bourg-en-Bress in France, and shipped to Turkey. The new generation will be fitted with Euro 5 compliant engines. Bourg-en-Bress is the main production plant for Renault Trucks. Volvo would not confirm which transport provider would be handling the shipments or the method of delivery, though Omsan Logitics has been handling distribution of Renault Trucks in Turkey.

Volvo Group has more than 25 truck dealers and workshops in Turkey, as well as an aftermarket distribution centre for both Renault and Volvo Truck brands.

A spokesperson for Volvo Group said volumes will be dictated by sales but said it did not provide specific figures per country or brand. Last year Karsan produced just over 1,000 Renault Truck units for the local market, and on an annual basis was making between 800 and 1,000. It made almost 600 units in the first half of 2013. Renault Truck production accounted for 6.5% of production at the Karsan plant.

Volvo Group said that the mutually-agreed decision with Karsan to move production for the Turkish market to France, rather than upgrade the plant in Bursa, would better utilise its own existing truck plants and improve industrial performance and competitiveness.

“When a new range is on its way out, it is completely natural to gather all production in one factory only, that is Bourg-en-Bress, since this factory already needs adaptation to the new range,” said the Volvo Group spokesperson.

For its part Karsan said that the investment in Renault Truck production would now be used for its own model investments, and for the manufacture of vehicles produced for Hyundai.

“Since our assembly line is very modern and flexible it can be modified to accommodate other vehicles to be manufactured,” Karsan’s executive director, Jan Nahum, told Automotive Logistics. “This cancellation won’t affect us much.”

Karsan is making its own brand JEST, MPXL and CXL minibuses, and has additional output under licenced contracts. These include an agreement with PSA Peugeot Citroën for light commercial vehicle production of the Citroën Berlingo and Peugeot Partner for the local market, and those outside the European Union. It is also making the Hyundai HD 35 and 75 as well as the BredaMenarinibus. Karsan is also providing sales and aftersales services for Hyundai and BredaMenarinibus along with its own brands, as well as industrial services at the Bursa plant.

Gefco is handling outbound logistics for the Peugeot-Citroën models on behalf of PSA, and Karsan is working with logistics provider Cavusoglu Nakliyat for delivery of its own braded vehicles to the local market.