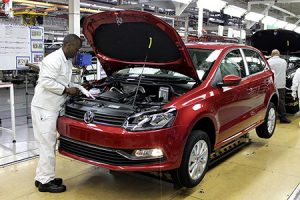 Motor manufacturers will leave South Africa if the government reduces the current incentive scheme while moving to penalise them for a lack of black equity holders and suppliers, the head of Volkswagen’s operation in the country has warned.

Volkswagen South Africa MD Thomas Schäfer said recent discussions with the government revealed some officials wanted to divert resources from the Automotive Production and Development Programme (APDP) to other projects. The government was also pushing for the auto industry to adopt the same levels of black equity holders as other sectors like mining are required to meet, he said.

“South Africa accounts for only 0.6% of global vehicle production and we are not really cost-competitive,” Schäfer told the Business Day newspaper recently. “But a lot of the disadvantages are overcome by the APDP. If it went away, it would be the immediate end of the motor industry in South Africa.”

Volkswagen SA spokesman Matt Gennrich confirmed Schäfer’s statements, adding that every country in the world that had a successful vehicle manufacturing industry had some form of subsidy or incentive scheme. When such schemes were ended or reduced, he said, carmakers walked away.

“The most recent and best example is Australia, where the last two plants will close in 2017,” Gennrich said, referring to the imminent departure of the last motor manufacturers from the country after Canberra refused to bolster local industry with incentives.

Currently, South Africa’s ruling African National Congress (ANC) is struggling with a flat economy. It is also under pressure to increase social funding amid growing public discord. In recent months, universities around the country have experienced running battles between police and students demanding free education.

The ANC was also given a drubbing during municipal elections earlier this year which saw several key metropolitan areas fall to the main opposition party. Consequently, senior party officials are scrambling for new sources of funding to push towards crowd-pleasing state projects.

Pushing for broader ownership and supplier mixThe government has also been pushing for manufacturers to take on more black partners as well as using more black suppliers. Under the Broad Based Black Economic Empowerment (BBBEE) law, key sectors are required to meet a set of targets meant to increase black participation, including specific milestones for ownership as well as suppliers.

To meet such goals, Volkswagen would need some 500 black suppliers but has only found 41 so far, said Gennrich. “They simply do not exist,” he said. “When we tried to find these through various channels we could come up with less than 50 who could potentially be first tier suppliers to the automotive industry. This is largely due to the high-tech nature of this business and the huge investments required.”

Globally, motor manufacturers have shied away from taking on equity partners that dilute their ownership and control. BBBEE law requires that large firms have at least 20% black ownership and has already been widely implemented in strategic sectors such as mining.

However, while mining firms have no choice but to comply, given the location of the raw materials their businesses depend on, motor manufacturers could simply up and leave.

Gennrich said talks with the government on the issue were ongoing.

Even if the current incentive scheme were just watered down, a mass departure could be on the cards, he added. The only factor that could tempt carmakers to stay was if exports to the broader African market made up for domestic shortfalls, Gennrich said.

To this end, Volkswagen has recently signed an export deal with the Kenyan government for the Polo Vivo range manufactured at the company’s Uitenhage assembly plant in the Eastern Cape (pictured). From December this year, the cars will be shipped partially disassembled to Kenya, then put back together at a factory near Nairobi.

The Department of Trade and Industry has not responded to a request for comment.