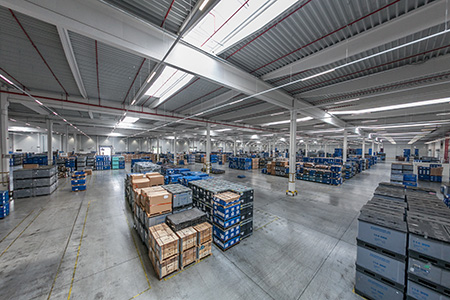 Volkswagen Group has officially opened a new group consolidation centre near Bratislava, in Slovakia, to handle inbound goods for 28 production plants across Europe.

The 19,000 sq.m ‘KCC’ consolidation centre at Malacky, around 35km north of Bratislava, was officially inaugurated on August 24th but has been fully operational since March. It provides a new trans-shipment point for full and empty containers for VW passenger cars and commercial vehicles as well as Audi, Skoda, Seat, Porsche and Lamborghini brands.

The site, which features 24 loading and unloading stations and 50 truck parking spaces, is being operated on VW’s behalf by Duvenbeck, a German 3PL that has long handled transport for the group in the Ruhr area and more recently also began transport operations for it in Slovakia and Hungary. The KCC will handle some 1,200 tonnes of material and 6,000 containers a day from around 540 suppliers in Slovakia, Hungary, Romania and Bulgaria, reducing traffic from an average of 90 inbound trucks to 65 outbound ones.

Thomas Zernechel, head of Volkswagen Group logistics, said the new centre would provide “a sustained reduction in truck traffic of about 10%” to the group’s European plants.

The facility was constructed specifically for VW over the last two years and the OEM has committed to rent it for at least 10 years, said a spokeswoman for the group. It is around 7,000 sq.m larger than the former logistics facility in Lozorno, a few kilometres further south, she added.

The spokeswoman declined to go into detail about the contract with Duvenbeck, however, or to say what cost had been involved in setting up the site.

Bratislava has been an important trans-shipment area for the Volkswagen Group for some time already. Back in 2014, Dieter Braun, head of production control and plant logistics at Audi’s Neckarsulm plant, pointed to a then-new group crossdock facility in the area as a model for further similar “big steps forward” in Germany.