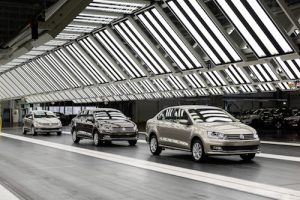 Volkswagen has become the first carmaker to sign a tax exemption deal with the Russian government, according to a recent statement on its website.

Under the agreement, the German carmaker is exempt from payment of VAT and excise rates on automotive components, whether imported or produced in Russia, where they are used for the assembly of finished vehicles and other products eventually destined for export.

With the new agreement, VW will be able to export 40,000 engines from its plant in the city of Kaluga and export 10,000 Skoda Octavia vehicles in 2018, the OEM said in a statement.

Volkswagen Group Rus has invested €250m ($305m) in the Kaluga plant (pictured) but because of sustained low sales in the Russian market the facility has not reached yet reached full production capacity of 150,000 units a year. In 2017, for instance, it released only 103,000 engines.

The carmaker described its plans to export the Skoda Octavia from Russia in 2018 as its “second export-oriented project” there. It is not yet clear, however, whether it will continue to export any other finished vehicles: last year, Oliver Grunberg, technical director of VW Group Rus, said the carmaker would cease exports of finished vehicles from Russia as a result of high raw materials costs, quality issues and differing emissions standards.

The carmaker has not specified which countries it plans to export engines to, saying only that some are destined for those EU countries that still allow Euro 5 standard engines. Meanwhile, VW will only be exporting the Skoda Octavia to European countries with the Euro 6 emissions standard in place, it said.

A spokesperson for VW Group Rus told local newspaper Vedomosti the company would keep exporting finished vehicles from Russia to the CIS region, too.

VW is already exempt from paying customs duty in Russia on all imported automotive components, as part of the industrial assembly agreement it signed with the Russian government.

Exports on the riseRival carmakers may also wish to take advantage of a tax exemption deal with Russia’s government agencies.

According to data from the Federal Customs Service (FCS), exports of finished vehicles from Russia rose 12.3% during 2017 to 77,300 units, with a total value of some $1.2 billion.

Exports have been growing recently thanks in part to state support. In 2017, the Russian government started subsidising outbound logistics, including contracts for the transport of finished vehicles over the Russian border.