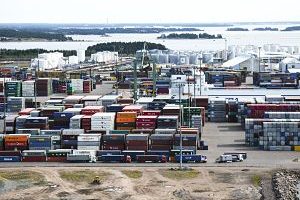 “A significant advantage of using the port of Kotka is the presence of the customs warehouse there,” Vostrikov confirmed. “The customs warehouse regime [in Finland] allows for storage of vehicles without any time constraints and without payment of customs duties.”

Direct delivery of finished vehicles to Russia requires customs clearance to be completed within 60 days as standard and 120 days in exceptional circumstances, stressed Vostrikov. Arranging customs warehousing in Russia was a “catastrophically expensive thing”, he added.

Customs arrangements are crucial for WWL and taking advantage of the Finnish rules will avoid having substantial sums of money tied up in customs duty until vehicles are sold, explained Vostrikov. Using the port of Kotka also meant vehicles could be delivered in Russia when required, helping distributors to avoid unnecessary storage costs, he said.

“An additional advantage of the port of Kotka is that transfer of ownership of vehicles from a foreign supplier to Russian legal entities can take place there,” he continued. “In terms of [finished vehicle] storage, Kotka has always been cheap and even with the growth [in exchange rates] of the euro, the cost of vehicle storage in Kotka remains lower than in St Petersburg.

“If we talk about port dues, vessel dues in Finland are higher, but freight [transport] in Kotka is cheaper than in St Petersburg. As a result, the [overall] cost of delivery is roughly the same,” Vostrikov added.

WWL has been managing inbound logistics for the Chinese Haval SUV brand since November 2015. In the first nine months of 2016, it delivered an estimated 600 cars in Russia for the OEM. Its contract with Haval is scheduled to last until 2018, when Haval plans to have opened a new assembly plant in Tula Oblast to avoid importing finished vehicles.

Vostrikov said that by the time this happened, WWL should have strengthened its position in inland logistics within Russia and still hoped to remain a key logistics provider for the OEM.