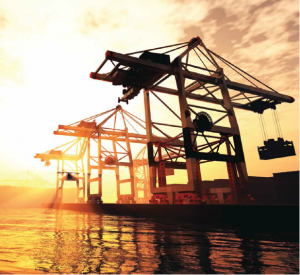 India’s Yogayatan Group is holding a foundation stone laying ceremony for the development of a port complex at Mankhurd near Mumbai this week (December 4th). Mankhurd is 10 nautical miles from Jawaharlal Nehru port across the Thane estuary and around 20 km north of the port of Mumbai. It will provide access to multiple types of cargo with the aim of supporting industrial development in the region.

The company has not confirmed whether finished vehicle traffic will be handled at the port but phase one of the six-phase development planned includes supporting infrastructure and services for breakbulk freight. There are also plans for a container terminal, which will form phase five of the port development.

Yogayatan port will also feature a shipbuilding and repair yard, an LNG and regasification facilities, along with a supply base and passenger terminal.

The facility will also support feeder movement of cargo received by road and rail to other nearby ports according to the company. Yogayatan is expected to complement the port of Mumbai with the Government of India’s policy to reduce congestion and pressure on existing ports.

“Yogayantan Group has always endeavoured to serve the best by using superlative technology and with constant support of the Indian Government, we will strive to expand operations of the Yogayatan port,” said Dr Rajendra Singh, chairman, Yogayatan Group.

In a statement Yogayantan Group said it intended to use barge transport to service ships, to reduce usage of road or rail transport and overcome their respective limitations.

“We also intend to use small coastal freighters that consolidate and transship loads to outbound major ports or for inbound distribution to other parts of India. The facility will be suitable for a variety of cargoes currently berthing at other ports along the west coast of India due to the congestion at the Mumbai port,” stated the company. “The facility will also ensure feeder movement of cargo received by road and rail to JNPT and other nearby ports.

Amongst the benefits of the site mentioned by Yogayatan Group are its strategic location close to the industrial area of Mumbai and Navi Mumbai, which is currently benefiting from large investment, including a planned special economic zone.  The location also has the advantage of proximity to international sea-routes, low dredging requirements, a natural all-weather harbour and, connectivity to national and regional road and rail routes.