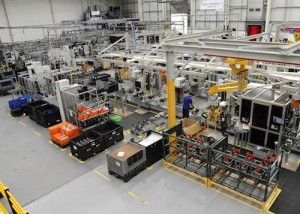 Chassis systems supplier ZF Lemforder UK, part of the ZF Friedrichshafen group, is celebrating the tenth anniversary of production at its facility in Solihull, near Birmingham. The anniversary coincides with the installation of a second line producing axle corner modules for just-in-sequence and just-in-time supply to Jaguar Land Rover’s (JLR) Lode Lane plant six miles (10km) away.

Despite the reorganisation of 50% of the 4,100 sq.m facility, ZF Lemforder took just nine months to get the line up and running with no disruption in supply to the carmaker – a transition that has required substantial logistics and material handling considerations.

ZF’s Solihull facility annually produces 180,000 vehicle sets for the nearby JLR plant, which makes the Land Rover Discovery and Defender, Range Rover, Range Rover Sport and, since September this year, the Jaguar XE.  It also supplies 9,000 sets for JLR’s plant in Castle Bromwich, which makes the Jaguar XK, XF and XJ models as well as a two-seater F-Type sports car. Those sets are made in 68 variants for the front and rear suspension modules. For the feed to the Lode Lane plant, the company aims at a just-in-sequence buffer target of 185 vehicles, with a four-hour lead time between the quantity call off from JLR and the delivery of the modules. It also maintains a rigorous “no fault forward” strategy in terms of quality management that has resulted in 44 months of zero defects in the modules delivered to JLR.

Chassis components are also supplied from the ZF Lemforder facility in Darlaston, around 30km northwest of the Solihull location.

Production and supply has been maintained during the restructuring, which began last November. Installation of the second line began in April this year and the first axle corner modules started coming off it in August.

Adrian Chell, site manager at the ZF Solihull facility, described the process of incorporating the new line as something of a jigsaw puzzle, where each work area was moved around step by step, a procedure that demanded some “aggressive facility work”. Although this was technically challenging, the company already had experience in making such changes without disrupting production.

“We had a dynamic start in 2004 [when the facility was established] so it was something we were familiar with and were able to manage it successfully,” he said. “JLR is expanding dynamically at the moment and they need the flexibility from suppliers like us to meet that and do it reliably.”

Since it began operations, the company has invested around £13m ($21m) in the facility.

This year 20 vehicle sets an hour are being produced on a single shift on the new line, exclusively at the moment for the Range Rover Sport. However, this is due to increase to two shifts in November this year, and move to three in January next year.

Controlling the supply chain
ZF Lemforder’s original line produces 42 modules an hour on a three-shift pattern. This ties in exactly with JLR’s assembly schedule of 42 vehicles an hour.

The modules on both lines are produced just-in-sequence and dispatched to the JLR Solihull plant every 43 minutes. ZF Lemforder has contracts with logistics provider DHL and local firm RGF Logistics for the transport of the modules between its facility and Lode Lane. DHL is also the lead logistics provider for JLR’s inbound supply chain in Europe.

On the inbound side, the company receives deliveries hourly on a 24-hour basis from suppliers across the UK and Europe, including Germany, Poland, Slovakia and Turkey. Lead times on inbound material from the UK is between one and two days, and from Europe it is between three and five days.

The company is fully responsible for its supply chain logistics for the inbound material from the tier suppliers, even in the case of supplies to the module that are not built or sourced directly by ZF. In those cases, JLR nominates the supplier and ZF Lemforder manages the collection and delivery of the parts.

“We schedule the suppliers,” explained Terry Somerfield, managing director of ZF Lemforder UK. “The suppliers are dotted around Europe and the UK and we have to bring the material in, in optimised truckloads and store it here. There is quite a bit of science behind these schedules and the loading of the trucks so we can keep the minimum amount of stock here.”

The company also manages the return of packaging to the suppliers.

Last month, ZF Friedrichshafen announced that it would acquire safety systems supplier TRW in one or the largest supplier takeovers in the automotive sector.