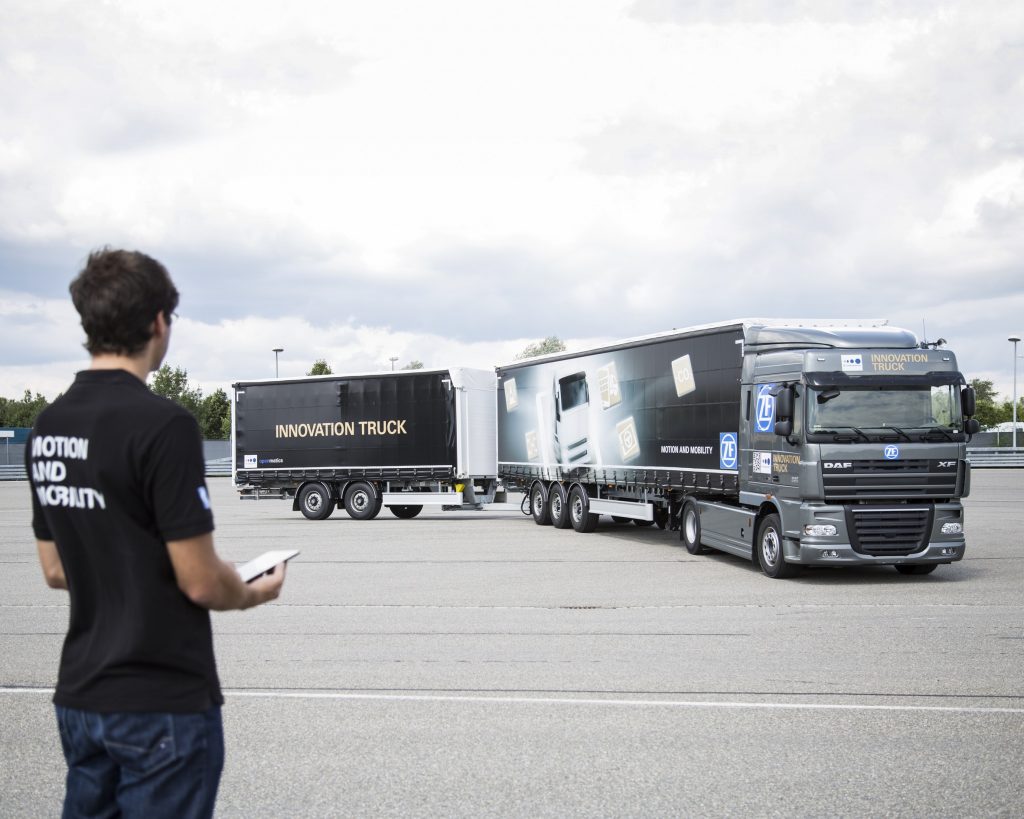 Driver shortage is one of the biggest concerns facing the logistics and supply chain industry. The reasons for the shortage include fewer younger drivers entering the profession, the baby boomer generation retiring, lifestyle, and stricter regulations on safety records and hours of service. It is estimated now that 35,000-40,000 drivers are needed across the general trucking sector. OEMs, suppliers and logistics providers are employing techniques to lure drivers into the profession, and working on technology that could benefit the trucking industry, and consequently improve logistics.

One concept demonstrated by ZF last year was the company’s 2014 Innovation Truck, which could significantly aid logistics. The truck combines ZF’s TraXon Hybrid transmission system with steering technology and telematics. A truck more than 25 metres long, with a trailer and semitrailer, can be manoeuvred with a tablet remote control from outside the cab, with zero local emissions. It would benefit both the daily work of truck drivers, and aid logistics processes, especially at depots.

It is often difficult for truck drivers to keep their time schedules and comply with legal regulations, and moving the truck onto a ramp can often lead to damage. The so called ‘mega trucks’ are even more difficult to manoeuvre. Olrik Weinmann, project manager in Advanced Engineering and Testing at ZF, and responsible for the Innovation Truck said, “The manoeuvring assistant in the Innovation Truck completely relieves the driver of this steering work and much more. They can get out and move the tractor-trailer to the exact position required with only small finger movements and using a special tablet app.”

Andrew Whydell, director, global electronics product planning, TRW Automotive (which is now part of ZF), said there has been increased demand for auto docking. “In terms of application and auto docking, it’s something there is a lot of interest for. One of the primary causes of damage to a truck comes during the loading and unloading process. Being able to use cameras and sensors will play a key part... you saw the first stages of that with the 2014 Innovation Truck. This is something that will continue to evolve over the coming years, and you will see some further developments from us in this area.”

Is the future autonomous?
Many OEMs are promising autonomous cars over the coming years, but the developments on the commercial vehicle side have been a bit quieter. However, progress is being made. For example, Daimler Trucks demonstrated the capabilities of its ‘Future Truck 2025’ on a section of motorway in Magdeburg, Germany . While fully autonomous trucks may be decades away rather than years, steps are being taken.

Whydell said, “In terms of building the real components and systems needed to put autonomous driving into production, we’re competitive. What we’re showing today is the first steps of what you will be able to see in a couple of years’ time.”

ZF and TRW’s approach is to ensure people are familiar with the technology before a big rollout. However, Whydell said that ZF is potentially further ahead in bringing autonomous aspects to commercial vehicles than passenger cars.

“In Europe, the radar sensors for automatic braking and lane departure warning are already mandatory,” Whydell added. “Legislation is dictating the next steps of safety technology.”

TRW has been working on electronic stability control and adaptive cruise control for trucks driving on motorways for the past decade. “This technology is not too far away from a commercial vehicle application. From a fleet operator perspective it is something that will benefit driver comfort and retention,” Whydell said.

Aside from benefiting lifestyle for drivers, developing autonomous truck technology will provide safety benefits. “Safety is a strong business case,” noted Whydell. “There will also be less down time, operations will be improved, there will be less damage repair, drivers will be more enthusiastic, and it will be more comfortable so there will be a lower turnover rate. That is what is getting the industry really excited. If you look at the US, you have a truck driver whose job it is to keep a 10ft-wide [3-metre] truck in a 12ft-wide lane all day. If you have some technology that helps the driver to achieve that goal, then there’s a really strong incentive for a driver to stay with a company,” he added.

Automatic braking
Automatic emergency braking is also becoming more commonplace. Many new passenger cars in the B- and C-segments are fitted with some kind of automatic braking system, and safety bodies such as Euro NCAP are strongly pushing automatic braking technology in particular. “If a truck or bus driver has an accident it tends to be newsworthy, which is why the European Commission has treated truck as a large-scale fleet trial, and used it to test out the first steps of autonomous technology. Once you have professional drivers doing long journeys in trucks, the technology can filter down in the coming years and become regulation for passenger cars too,” Whydell said.

Full automation may be decades rather than years off but there is a possibility that OEMs, suppliers or logistics providers could begin to run autonomous vehicles intra-plant, or on private land. Fully autonomous trucks are already being used in applications such as mining trucks or in diamond mines in northern Canada, and the technology could be used closer to home. “There are some real economic benefits that could come from running autonomous trucks. You can eliminate manpower and those operations will become much more efficient,” Whydell concluded.