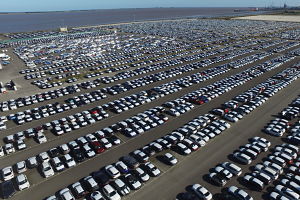 Able UK, which runs a vehicle storage and logistics terminal in the UK’s Humber Estuary, has signed a nine-year contract with the BMW Group.

The deal will see the development of facilities including a 4,300 sq.m pre-delivery and inspection facility at the Able Humber Port. When completed at the end of 2017, it will provide storage for over 10,000 vehicles on the 60-acre site.

Able said the new contract involved a further £25m ($30.2m) investment over and above the existing large-scale vehicle and storage facilities at the site.

Able said it was continuing development work at the port, including the construction of a link road, for its Able Logistics Park project, which covers over 1,200 acres. Full planning permission is in place for the development of the warehousing, external storage and transport depots.

A spokesperson for BMW told Automotive Logistics: “We’re delighted with the new facility, which will become operational from the end of this year, and look forward to seeing its construction and completion over the coming months.”

According to the Automotive Logistics 2015 European Ports survey, the nearby ports of Grimsby, Immingham and Killingholme handled a combined 1.05m vehicles in 2015.

BMW has a global network of vehicle distribution centres (VDCs) that handle a variety of processing, regulatory conversations and other measures related to importing vehicles. In the UK, it has a VDC in Thorne, in Doncaster close to Grimsby.

In 2013, a new £26m vehicle processing operation opened in Grimsby, serving OEMs that include Volkswagen.