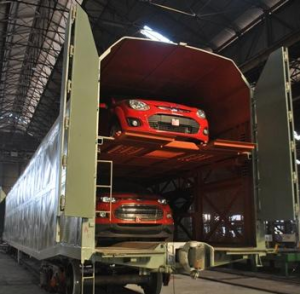 Transport and logistics providers APL Logistics and Vascor have launched a new rail service for finished vehicle movements in India.

Called AutoLinx, the operation has been developed by APL’s joint venture with Vascor – APL Logistics Vascor Automotive (APLL Vascor) – which is based in Delhi. The first train left Melpakkam, near Chennai, carrying approximately 280 vehicles bound for the multimodal logistics park at Khatuwas, near Delhi, which is operated by Container Corporation. It is expected to arrive next week.

The regular service will run every two weeks between Chennai and New Delhi to begin with but this frequency will be increased and more destinations added to the network in the coming months according to the company.

APL Logistics Vascor Automotive is the first third-party logistics (3PL) provider to offer rail-based services under the Automobile Freight Train Operator (AFTO) licence administered by Indian Railways, a policy reform to the state-dominated provision of services made by India’s Ministry of Railways back in July 2010. The policy was introduced to allow private companies to be able to offer rail services to carmakers as the automobile sector in India grows. Currently only around 5% of finished vehicle traffic in India goes by rail.

The policy was introduced following the railways budget announcement made by the then minister of railways Mamata Banerjee, which stated that there was an urgent need to develop new business models and invite domestic investment through public-private partnerships.

The AFTO licence allows logistics service providers to facilitate bulk movement of automotive traffic by rail from the production hubs to consumer centres, as well as ports for export.

Carmaker Maruti Suzuki already has a licence but has used the solution exclusively for its own vehicles so far, a move that was perceived as a waste in certain quarters of the industry given that their wagons were running empty on the return leg and straining capacity. The APLL Vascor service by contrast will offer services to a number of carmakers including Ford, Honda, Hyundai, and Renault-Nissan.

Trial runs were conducted in close collaboration with those carmakers. They began in September and focused on the service corridor between Chennai and Delhi, and involved the handling, movement, and delivery of more than 1,100 finished vehicles.

Efficiency, security and reliability
At a ceremony held at Melpakkam to launch the APL Vascor service India’s Minister of Railways Shri D. V. Sadananda Gowda waved off the first train. The ceremony was attended by representatives from Indian Railways, local city and government officials, carmakers, including Ford, and rail terminal operators.

“We are delighted to start formal operations of AutoLinx and offer India’s automotive market specialist solutions to solve their unique supply chain challenges,” said Bill Villalon, global vertical leader, Automotive – senior vice-president for APL Logistics and chairman of the joint venture. “Our customers tell us they value the efficiency, security and reliability that this innovative rail solution offers for the distribution of finished vehicles across India.”

Ford and Honda have both welcomed the new service.

“Ford India welcomes the introduction of rail transport for finished vehicle distribution in India by APL Logistics Vascor Automotive and is excited to be part of this innovative solution,” said Amlan Bose, vice-president APA Logistics at Ford India. “Transition towards multimodal logistics solutions is key to driving and sustaining the high growth automobile industry in India. “Ford India congratulates the APL Logistics Vascor team for their tenacity and hard work in launching this project and wishes them great success in future.”

Honda Cars added that it was happy the alternative transport that was taking shape in India would help reduce the pollution and congestion on the roads. Speaking to Automotive Logistics back in March this year Achal Paliwal, head of exports and logistics at Honda Cars India said the use of rail was a welcome alternative to road.

“Strategically speaking, today [Honda’s] finished vehicle movement is 100% dependent on road,” he said. “Given the road conditions and environmental impact of carbon emissions, we need to find a viable alternative. Railways will be the best option.”

Paliwal said Honda would be among the first to use APL Vascor’s service, especially for vehicles moving from its plant in Greater Noida, near Delhi, to the south of India (read more about India’s rail reforms here).