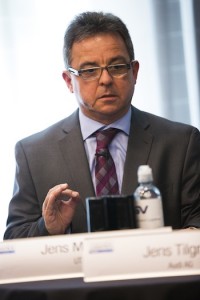 Audi has called for an open, common network of consolidation points, which could be managed by a cloud-based transport management system and control tower, to help break the ‘black box’ of transport costs and visibility.

Jens Tilgner (pictured), head of material transportation at Audi, told the Automotive Logistics conference in Bonn that the carmaker has seen a huge rise in part numbers, which now make up around 4,500 per Audi model sourced from 6,000 tier suppliers. As the carmaker has doubled volume and models in the last ten years, the complexity is ever increasing. Part flows are also increasingly global, with Audi sourcing more parts in its regional production locations, rather than sending kits from Europe.

“The world is changing for us. In Mexico, which will be the sole production hub for the Q5, we will aim to source as much as 80-85% locally,” he said. “We will then have the opportunity later to move kits and parts from Mexico to India and China, should we later localise assembly of the Q5 in those markets.”

Despite this complexity, Tilgner said that logistics remains something of “a black box”, in which the costs and operations are not truly understood or visible. Audi, together with the Volkswagen Group, intends to take more control over the supply chain with the design of a consolidation network, referred to among the group as the ‘new logistics concept’. The goal is to have a highly segmented logistics network where routes, operations and costs are fully synchronised and planned.

In the Volkswagen Group concept, the network would be open in the ‘foreruns’ between suppliers within the group, after which point the material will be consolidated at a defined consolidation point. From there, logistics providers make highly frequent, full truckload deliveries to Audi plants, for example, based on a highly synchronised, stable production flow.

Tilgner said that he wanted to see all of the information within the transport network in one control tower, including visibility over transport orders and operations, as well as the ability to print all necessary labels off the ‘cloud’.

There was agreement among delegates that such a web-based control tower would be beneficial (and indeed, some manufacturers and providers are already working with such a system). But there was also acknowledgement that a lack of standards between manufacturers in terms of their labelling, scanning and communication methods would hold back some of the system’s benefits.

John Canvin, head of Odette, a standards association for automotive, said that it would be possible to create these standards in a relatively short period. “Odette is ready to do this. We just need participation from OEMs to make decisions. We could start within a few weeks,” he said.