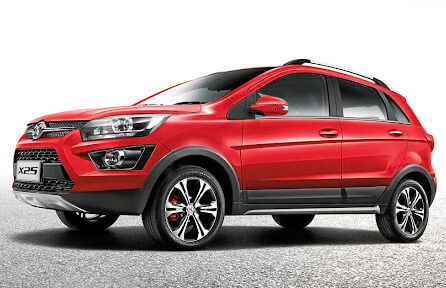 Chinese vehicle-maker BAIC has officially opened its 11 billion rand ($834m) assembly plant in South Africa, which will start making the X25 compact SUV from imported semi-knockdown (SKD) kits in the fourth quarter of this year. BAIC has been exporting the vehicle to South Africa from China since 2017.

The company’s goal is to manufacture 50,000 units a year by 2022, doubling that in due course to reach full capacity. BAIC envisages selling around 40% of the plant’s output in the local market, where it has 17 dealerships (with plans to add to that), while the other 60% will be exported to the rest of Africa, as well as the Middle East and Latin America.

BAIC had originally intended to open the plant towards the end of 2017 and assemble vehicles from complete knockdown (CKD) kits. However, construction of the facility was halted when the IDC and other stakeholders became aware that BAIC planned to import labour and materials. Local suppliers also questioned tender documents and threatened to take action against the company. These hold-ups put the opening back by about a year and forced a change in production plans.

The company said it had extensively engaged with South African automotive component manufacturers and suppliers in the past two years. While the X25 will be assembled from kits, it will still use some local components. According to local media sources, the initial localised procurement plan will include 39 parts, mainly accessories for interior parts such as roof lining, carpets and seats.

The plant will employ around 120 workers by year-end and the IDC’s CEO, Geoffrey Qhena, said the “numerous” local and foreign components manufactured would also generate additional investments and jobs in the supply chain.

South African president Cyril Ramaphosa and Chinese president Xi Jinping officially opened the plant via a video link while they attended a summit of the BRIC nations hosted by South Africa in late July. Ramaphosa said: “This [milestone] confirms the value of the relationship between our countries and the practical, solid co-operation that we enjoy at an investment level.”

President Xi said the opening of the plant demonstrated that China had kept its word, adding that Africa, as well as Asia, had huge potential for growth and China would play a role in driving rapid growth on the African continent.

A few weeks ago, Germany’s Mercedes-Benz announced it would spend €600m ($701m) on its assembly plant in East London, South Africa, to produce the next generation of its C-Class cars.