BMW and logistics automation: from prototype to (augmented) reality 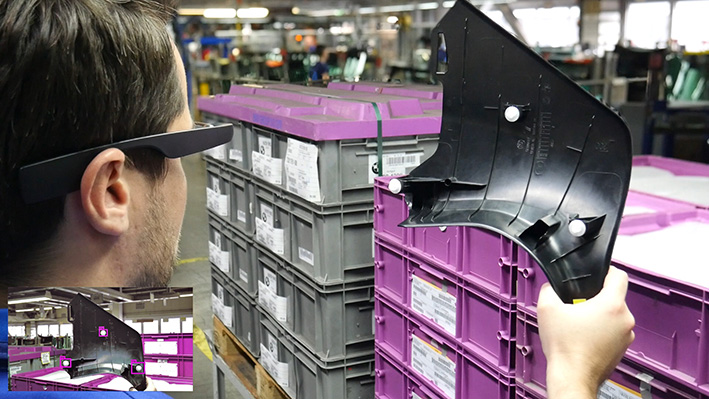 The premium carmaker is taking a step-by-step approach to bringing smarter automation and digital technology into its day-to-day operations, with big plans for the future.

Examples include sensor-based AGVs and ‘tugger trains’, a number of which are now active at plants or warehouses; the carmaker is also exploring the use of mobile robots that use image processing to pick up parts or containers, as well as data goggles to assist in parts picking.

Furthermore, a transport management system (TMS) that connects active shipment information across logistics carriers is also being put into place, with plans for more extensive track-and-trace in real time. For vehicle logistics, a pilot project to use in-vehicle telematics and communication systems to track locations and status has entered its second phase of development.

The projects, which were discussed at length recently at a BMW press event near Munich to showcase logistics innovations, are part of a long-term ‘Connected Supply Chain’ vision in which the carmaker foresees higher levels of autonomous driving, the internet of things and data analytics to create a “self-steering” supply chain – something the carmaker’s board member for production, Oliver Zipse, outlined in detail earlier this autumn at the BVL conference in Berlin.

BMW’s vision is to combine the use of connected technologies and automation to increase the stability and flexibility of production and distribution. Executives at the carmaker also see these changes as a way to support – rather than completely replace – automotive logistics workers, many of whose tasks have so far seen less automation than in car assembly or e-commerce warehousing, for example.

“The use of innovative and digital technologies will become a key factor in our complex logistics processes,” said Jürgen Maidl, BMW Group’s senior vice-president of logistics. “Some of these ideas might seem futuristic and many elements will come much later. However, many processes are already in place and gaining pace in our supply chain.”

While Maidl admits that the road to a fully autonomous, self-steering logistics chain may be a long one, stretching out many years from now, digitalisation is increasingly reshaping BMW’s logistics. In many areas, what is starting out as either a pilot project or a small, practical application is laying the groundwork for more advanced connectivity or automation in future.

AGVs and more flexible robots are one specific area currently getting a lot of focus at the carmaker. Earlier this year, BMW unveiled the smart transport robot (STR), which uses sensors and self-driving technology to move to workstations in the most efficient way, rather than following pre-defined routes. Ten STRs have so far been commissioned at BMW’s logistics centre in Wackersdorf, in southern Germany, where material is consolidated for knockdown kit exports to BMW plants around the world.

According to Maidl, the STRs will be rolled out in more time-critical environments to deliver parts within assembly plants. The plants to use the STR next will be its German sites, including Regensburg first, followed by Leipzig and Dingolfing. The rollout at the plants will coincide with the introduction of new model cycles at each location. 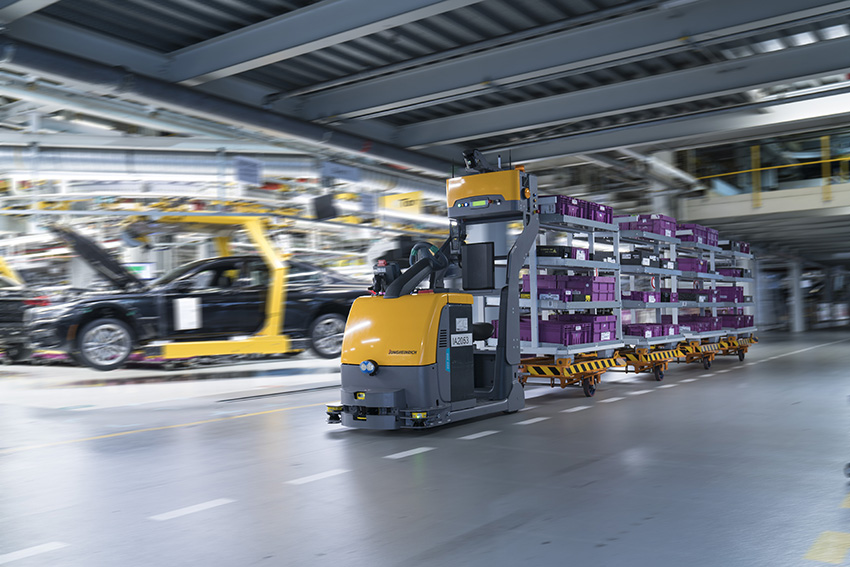 Autonomous ‘tugger trains’ are also being piloted at Dingolfing (pictured right), which builds the carmaker’s top-range vehicles. The trains move material over longer distances, such as between warehouses and the assembly line. They navigate the plant based on laser signals; by evaluating their reflection, the vehicles generate a digital 2D room profile to guide their transport.

In the next step, BMW is interested in using even more flexible automation equipment and robots. One robot prototype, for example, uses a 3D camera to trace objects and obtain information about what it needs to pick up. As a result, it can be used for some tasks that have traditionally been more difficult to automate, such as parts picking. In a pilot in Leipzig, the robot is currently being used to assist workers with picking and transporting empty containers.

There are also pilots in picking using ‘data goggles’. The goggles support logistics staff by signalling to those picking parts where to find the right goods and where to place them. Going even further, the goggles can visually record the part being sorted and complete a quality check, verifying information from a previously compiled database and recognising different types of potential defects.

Such technology demonstrates the role that automation will play in logistics, with manual labour reduced in some areas and supported in others. “We see the future of automation in logistics including more cooperation, with workers supported in logistics by augmented reality and smart robots,” said Marco Prüglmeier, project manager for innovation and industry 4.0 at BMW. “We believe human beings will play an important role in the plant of the future.”

Towards a deeper connection in track and trace

Track-and-trace is another example where BMW is starting with practical improvements – with plans to go much further.

To start, BMW wanted to open up the ‘black box’ that has traditionally existed between material picked up at suppliers and delivery at the carmaker’s plants, during which time the carmaker has limited information about its inbound material – especially for intercontinental deliveries.

In the first phase, it is rolling out a TMS that integrates transport and route information across logistics carriers into BMW’s private data cloud. The information is then fed into a system that can be viewed via a ‘cockpit’ that provides an overview of material flows and inventory.

While this initial step is relatively straightforward – it has already been implemented on BMW’s international flows between Europe, Asia and Africa, with North America to follow next year – the next phases will move BMW closer to a ‘connected supply chain.’ For example, a real-time transparency in future would include GPS-based locations and remote ‘condition monitoring’ that could give information or warnings about the temperature, humidity and quality status of parts.

“We need to be able to track the current position and condition of material,” said Maidl. “For example, if containers on a ship to South Africa move around and damage parts, it could lead to a disruption of production. We need to know what happens on a ship so that we can plan a detour or alternative.”

This move towards using connected objects in its logistics is also underway for BMW’s outbound logistics, as it continues its ‘Connected Distribution’ project, which integrates data from in-vehicle communication systems in tracking vehicles. As well as seeing the location and status of vehicles, in the next phase the interior display will be used to send notifications or receipts for work steps in the transport chain. For example, it can display information about the accessories and options to be installed in vehicle distribution centres, as well as route and parking information at yards.

In future, BMW’s vision is to have a system whereby the material flows themselves – whether through sensors in parts, packaging or trucks – will move autonomously from order through to supplier, transport and handling in plants, and indeed final delivery, with any disruptions or deviations triggering automatic rerouting or reordering.

“The order and then the part and vehicle itself will signal what it needs in terms of logistics and where it should go,” said Maidl. “This shift to a decentralised process, where the products steer the direction, will have a massive influence on logistics.” 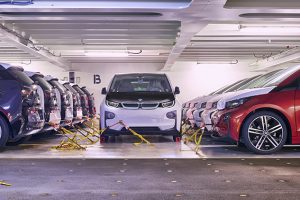 BMW is starting to use in-vehicle communication to track locations, and potentially issue work orders in the supply chain

While the carmaker’s in-house logistics innovation team and engineers have been exploring and implementing digital processes, BMW executives also emphasise the importance of working with supply chain partners and other manufacturers. Key areas of collaboration will include establishing standard interfaces and protocols for autonomous driving equipment, sensor-based telecommunication, and other kinds of automated messaging and tracking.

“One reason why we are sharing these projects openly is to address standardisation,” said Marco Prüglmeier. “We cannot solve these issues alone, but need a bigger approach.

“For example, if every manufacturer were to use its own closed system for autonomous transport, then logistics providers would not be able to handle the processes effectively when delivering to different companies,” he added. “We want to have open interfaces.”

Maidl also said BMW wanted to work with external companies and start-ups, as well as logistics providers, to adapt new technology. The STR, for example, has been developed together with the Fraunhofer Institute IML.

“We are open to each partner in technology and logistics,” Maidl told Automotive Logistics. “We recently held a big event with logistics providers that invited them to build upon our concepts. We are also going on innovation trips to other countries, including the US, Israel and others, to look for new ideas and partners for sensor-based equipment and IT systems in logistics.”