BMW: Flexing up for the fourth revolution 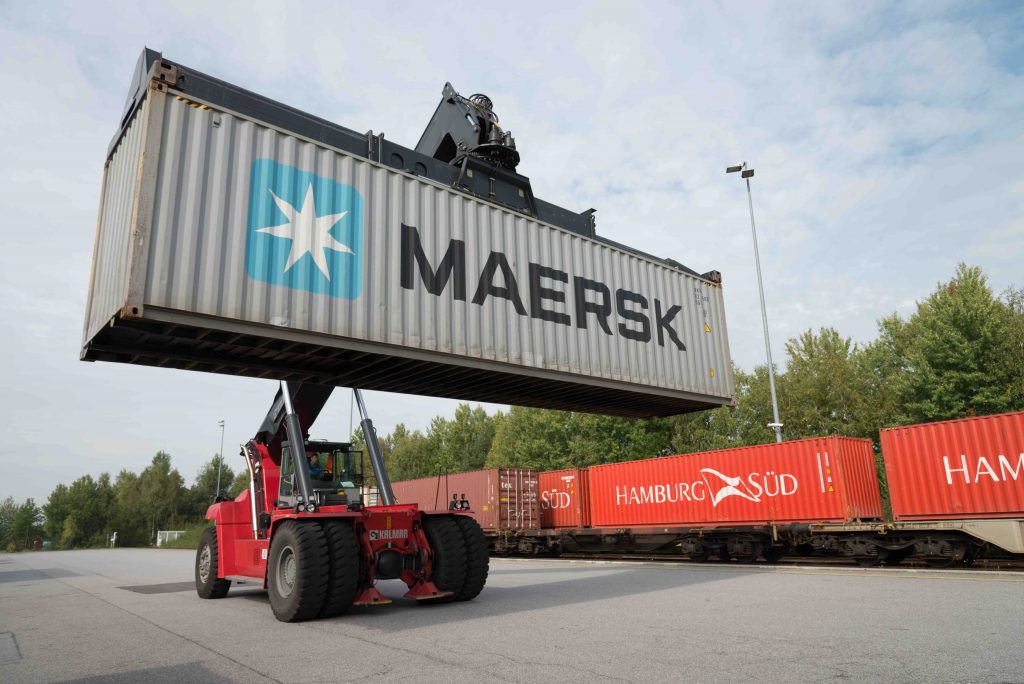 BMW’s partnership with Fraunhofer has produced innovations in materials handling to support its global parts exports, but these are only a first step towards wider digitalisation and automation in logistics

There’s nothing wrong with asking for a little help every now and then, especially when it comes to developing and testing new technology. That is why BMW has partnered with Fraunhofer, a German research organisation and one of the top bodies in its field for logistics systems and concepts, to develop new solutions and equipment across the supply chain. The OEM wants to make its logistics ‘smarter’, with a particular focus on its intercontinental logistics processes and centres.

The BMW Enterprise Lab for Flexible Logistics, or ‘Flex-Hub’, is a collaboration between BMW Group and the Fraunhofer Institute for Material Flow and Logistics (IML). The goal of the laboratory is to improve the flexibility of information and material flow, especially by using technology, software and new processes to eliminate barriers to cooperation between partners in the supply chain. The carmaker thinks that flexibility will become one of the key factors for production networks, especially with global supply chains subject to potential disruption and continual change.

One of the leading executives for the company in this area is Dirk Dreher, vice-president of foreign supply at BMW Group, who is responsible for the international supply of parts across BMW Group plants including the shipping of knockdown kits to partner and joint-venture plants and related logistics centres. He has been working in the automotive industry since 1993 and for the BMW Group since 2001, holding positions in motorcycle production and logistics in Berlin, in-house consulting and production systems; he was also responsible for restructuring the logistics for engine production in Munich.

Dreher points to the prevalence of unforeseen external influences in the supply chain and suggests that collaboration with partners and other stakeholders is one of the best ways to ensure reliability. He sees Fraunhofer, which BMW will work with over the next three years, as a perfect partner for combining materials handling innovations with BMW’s technological prowess.

[sta_anchor id="1"]Protecting against global uncertaintyImportant to BMW’s global logistics chain and a focus for the Flex-Hub are BMW’s export logistics centres. Aside from production plants, which may also have halls dedicated to these tasks, BMW operates such facilities at various locations in Germany and North America to supply its global network. 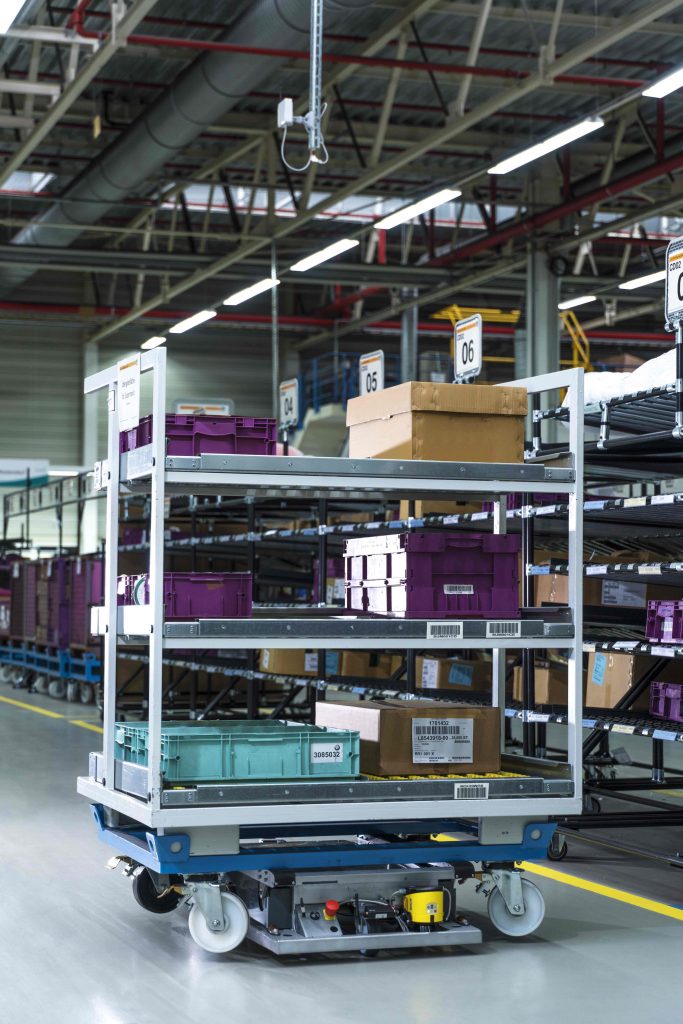 The self-driving robots being trialled at Wackersdorf use radio transmitters to calculate their position and route, while sensors allow them to avoid collisions with people or objects

These centres are important consolidation points for transport, as well as for stabilising the flow of international materials in line with global demand and production. In the Bavarian town of Wackersdorf, for example, BMW combines production of cockpits at an ‘Innovation Park’ where a number of suppliers build seats, cushions and carbon-fibre sheets, mostly for just-in-sequence production of the 3-Series in Munich but also for global locations.

On site is an important parts packing and logistics centre that receives parts from around 1,500 suppliers, packing and shipping around 10,000 containers per year to plants in ten different countries.

Wackersdorf thus combines a high degree of parts handling and packaging operations with complexity in ordering and transport. It helps the carmaker to reduce waste in transport in packaging by consolidating regional suppliers, while packing containers to high utilisation for ocean transport. “We are using an optimal mixture of local content and content from our packaging sites. We can reduce costs on one hand, and improve our sustainable footprint on the other,” says Dreher.

The variety and scale of operations at Wackersdorf has made it a good location to trial and develop new materials handling technology. One of the first examples to emerge from the BMW-Fraunhofer lab is a self-driving robot, about the size of a suitcase, that can carry containers of parts, which was developed and is being trialled in Wackersdorf.

Compared to automated guided vehicles (AGVs) used in other automotive locations, Dreher says the main difference is that the new robots navigate without using induction loops – such as magnetic strips set out on factory floors – which makes them completely self-driving and navigating. The robots measure the distance to three radio transmitters to calculate their exact position and route. With the help of sensors, they can identify any emergency situations and respond accordingly, making it safe for them to share the route with people and other vehicles. Each can be loaded with parts weighing up to half a tonne.

“It’s no longer necessary to steer them in the process,” says Dreher. “When tugger trains, other objects or people cross [their] path, a fitted safety laser scanner identifies the obstacle and stops the self-driving robot.”

After a six-month trial scheduled to finish in August, BMW plans to roll out the trolleys, which it builds in-house, to other BMW-run warehouses. According to Dreher, there could be ten in production by the end of the year.

“The project will then be rolled out step by step to the global production network of the BMW Group,” Dreher says.

If the innovation is implemented in series production, BMW plans to use a 3D camera that will make navigation more accurate. The battery-powered radio transmitters mounted to the walls of the hall can also be expanded to other areas without major effort and at low cost.

The trolleys are powered with recycled batteries from BMW’s i3 electric models, which provide eight hours’ worth of energy, or a full shift’s worth.

“The development of the smart transport robot is an important milestone for the BMW Group when it comes to digitalisation and autonomisation in production logistics,” Dreher says. “This innovation project makes an important contribution to the agility of the supply chain in logistics and production. It enables the supply chain to adapt to changing external conditions quickly and flexibly.”

BMW is testing a number of these autonomous vehicles in Wackersdorf as part of an automation drive that is expected to help cut costs by 5% per vehicle.

[sta_anchor id="2"]Big data opportunitiesDreher sees logistics as an important frontier in the drive towards increasing digitalisation in manufacturing, something the Germans, especially, refer to as ‘Industry 4.0’ – the so-called fourth industrial revolution that will see wider advances in connected and automated technology. “At our plants and logistics sites are several test series with a broad spectrum of technologies,” he says. “A key aim is always to find innovations that can be rolled out globally and are efficient.” 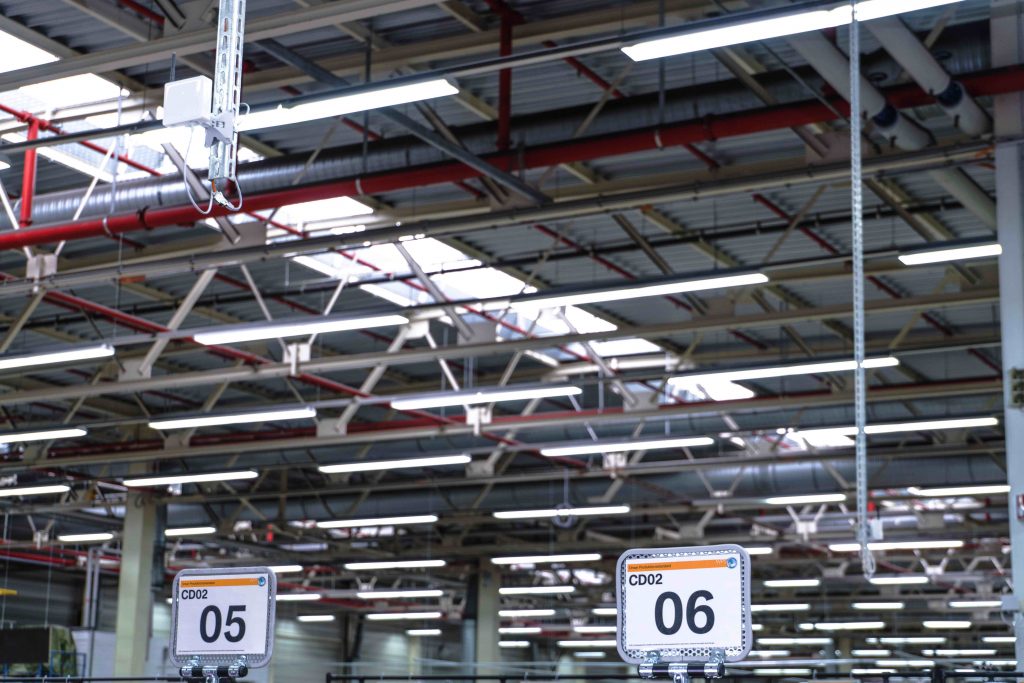 The self-driving robots being trialled at Wackersdorf use radio transmitters to calculate their position and route, while sensors allow them to avoid collisions with people or objects

For example, BMW is already using tablets with ‘augmented reality’ features – information displayed digitally – that help workers to check parts in production and during incoming goods inspection. “The main questions we ask ourselves are: how can we achieve our targets and efficiency goals with Industry 4.0 solutions, and what are the cases in the Industry 4.0 context which don’t make sense?” Dreher says.

In the long run, digitalisation will change the role of people in production, Dreher adds, especially in view of an ageing workforce in many of the company’s main production sites in Germany and Europe, as well as in the US and China. “People will be designers and enablers of processes to an even greater extent than they are today. For example, having lightweight robots work side by side with people at the line is a possibility to ‘demography-proof’ our ageing society by providing ergonomic support.”

BMW is not the only OEM concerned with giving a hand to its workers. Volkswagen has recently introduced a new handling system to support sequenced parts picking at its Wolfsburg plant, in a move to improve picking accuracy and boost the ergonomics of the operation for its staff. Previously, workers had to manoeuvre heavy trolleys when gathering materials for sequencing parts and had to walk significant distances, but now they can use a ‘ride-along platform’ that transports them and their goods from one area to the next.

BMW is also carrying out projects in other areas, including 3D printing and big data, some of which has already gained wide use at the carmaker. 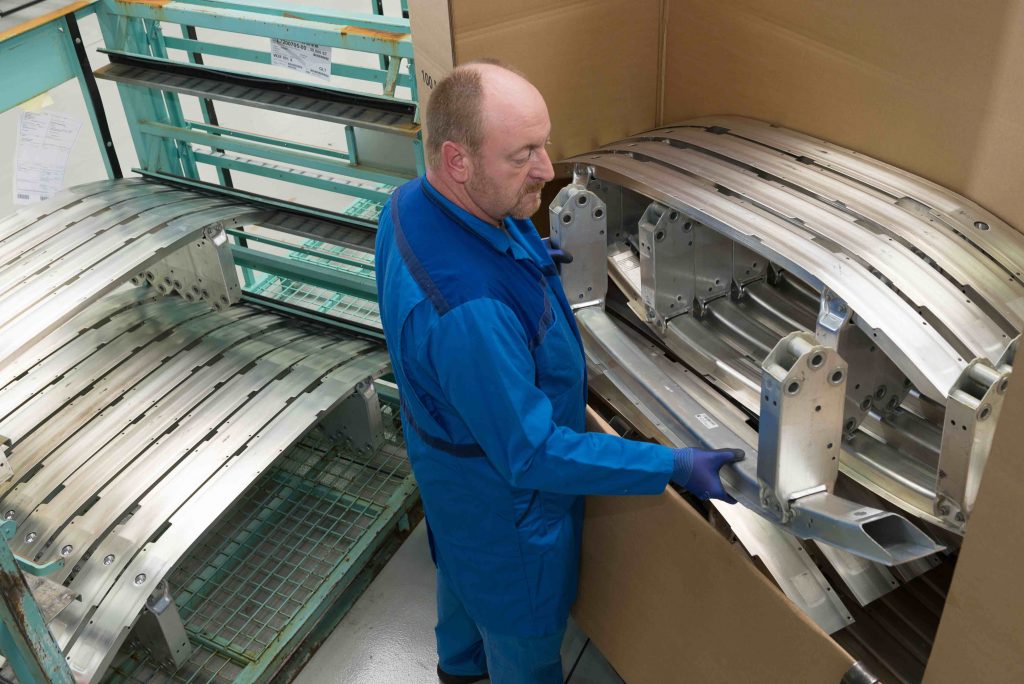 “We rolled out a digital 3D recording system for our existing plants,” says Dreher. “The 3D scan entails significant advantages compared to the two-dimensional, manual, standard approach. One example is that it only took several hours to scan the logistics area in Wackersdorf and to record it with an accuracy of 2mm with a special 3D scanner and high-resolution digital cameras. So the site now has a three-dimensional likeness of the production and logistics facility for planning purposes.”

With such complex and significant changes, Dreher stresses the importance of continuous training and collaboration across BMW and its supply chain partners as they implement and make the best of new technologies. “We need high-quality processes in combination with adequate costs, an agile organisation, standardised training methods, problem-solving skills and a continuous improvement process,” he says.

[sta_anchor id="3"]An inside car job?There has been much debate about how connectivity and autonomous features on vehicles will help those working in logistics and the supply chain in the future. Dreher says such data are already starting to provide great benefit to logistics as they give BMW a real-time insight into the supply pipeline.

“We have realised a significant cost reduction and enhanced our ecological footprint [by analysing big data],” he says.

Within the car, developers have drawn on the experience gained with the BMW i series of electric vehicles. Along with reusing the i3 batteries in robots, parts and sensors from cars could also be used to help improve logistics, Dreher says. The BMW 7-Series, for example, has automated parking, which could be used for self-loading during distribution. It could also potentially lower damage rates and improve quality.

Last year, BMW’s vice-president of vehicle distribution and vehicle distribution centres, Ulrich Wieland, revealed that the carmaker was actively trialling and exploring a concept of ‘connected distribution’ that would use in-vehicle telematics to track vehicle locations and communicate important status updates about the vehicle. Other carmakers, including Jaguar Land Rover and, more recently, General Motors and Fiat Chrysler have also revealed projects or studies to further use their own in-vehicle infotainment and connected-car features. 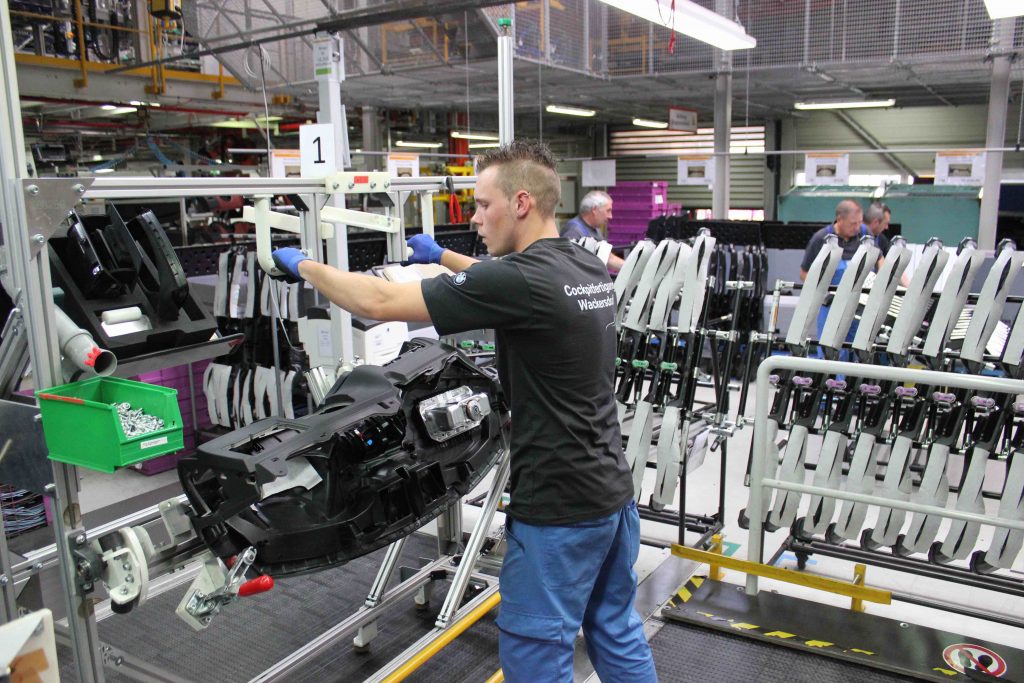 BMW’s facility in Wackersdorf, Germany is both a production site for cockpits and a logistics centre that receives parts from 1,500 suppliers and ships 10,000 containers per year to ten different countries

Some areas of digitalisation will also address more administrative, but still vital processes within the logistics chain. For example, BMW already uses several software systems to manage its logistics, including customs formalities and supplier billing.

“In general, digitalisation is a key issue for the BMW Group. We have a big data and analytics system in place to meet transparency and deviation management in the global supply chain,” Dreher says.

While technological innovation in logistics has arguably been slow and stilted, carmakers like BMW are now leading the way in adopting more advanced examples of automation, worker-assisted robots, big data and telematics. Dreher believes these areas mark just the beginning of some major changes to come over the next decade.