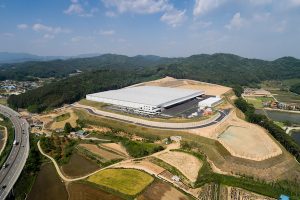 BMW has opened a regional distribution centre (RDC) in South Korea that is its largest outside of Germany, following an investment of 130 billion won ($116.4m).

The 57,000 sq.m. facility, in Anseong, south-west of the capital Seoul, was opened last week and is three times the size of its existing RDC in South Korea. It will hold an average of 75,000 parts.

It will handle the distribution of aftermarket parts to a network of 83 dealers and service centres across the country – 50 BMW, 19 Mini and 14 Motorrad.

BMW has confirmed it is working with logistics provider Geodis on the management of the facility and that the parts will be distributed to its network using Korean transport provider Shinhwa Logistics Service.

The RDC is located within a one-hour drive of Incheon International Airport and Pyeongtaek port and has connections with four major expressways: the Jungbu, Pyeongtaek–Jecheon, Seohaean, and Yeongdong. Furthermore, BMW said it would add a rail link to join up with the Eurasian railway line, which is due to start operation in 2019.

The South Korean RDC is the largest facility of its kind in the BMW network except for its headquarters in Munich, Germany. According to the carmaker, it is made up of six buildings including a main warehouse and storage units for hazardous goods and pallets. They are situated on a 21-hectare site with a 3-hectare expansion planned for the next stage.

“BMW has established 40 large-scale distribution centres across the world where over 400,000 parts are available for supply to ensure effective response to customer needs,” said Wolfgang Baumann, vice-president of parts logistics management at the opening ceremony last week. “With the opening of the new RDC, we have secured an expanded logistics system to successfully supply 2m parts a year to our dealers and customers.”

Last year BMW sold 48,459 vehicles in South Korea, according to figures from the Korea Automobile Importers & Distributors Association (KAIDA), the largest share at 21.5% of all imported brands.

The carmaker also said last year that its division in Thailand was planning to increase car exports over the next two years to 10,000 vehicles a year.

The opening of the South Korean RDC follows the opening of a 130m ringgit ($30m) logistics warehouse and parts distribution centre in Malaysia just over two weeks ago.