BMW parts distribution centre in US to cut double-shipping 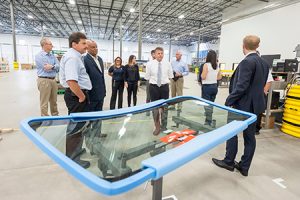 BMW has officially opened a new distribution centre in Spartanburg, South Carolina, to handle service parts from North America-based suppliers and destined for regional aftersales customers for the X-series SUV models built at the carmaker’s nearby manufacturing plant in Greer.

The facility, which the OEM refers to as a ‘continental distribution centre’ (ConDC), is a new type of operation for BMW outside of Germany and should substantially cut delivery lead times, transport costs and shipping errors.

The carmaker has contracted German logistics provider Senator International to manage the warehouse operation, while Protrans and Benore Logistics provide the transport from suppliers and on to regional distribution centres (RDCs).

The ConDC in South Carolina, along with another planned later for China, will eliminate double-shipping in the aftermarket for locally sourced BMW parts in its major sales regions.

BMW held an opening ceremony for the ConDC on June 29th, several days after celebrating the 25th anniversary of its plant in Greer.

Up to now, explained Wolfgang Baumann, vice-president of parts logistics management, North American suppliers have shipped service parts to BMW’s central distribution centre (CDC) in Dingolfing, south-west Germany, which stores a full range of BMW parts for delivery to 40 RDCs across the world. That has included parts destined for BMW’s six RDCs in the US.

Now, suppliers that ship to the plant in Greer will send a portion of their parts to the ConDC in Spartanburg, around 20 miles (30km) from the factory, where they will be consolidated for onward shipping to RDCs.

Baumann said the ConDC was part of a global effort at BMW to make its service parts logistics more customer-orientated, efficient and sustainable. That drive has already included a major overhaul of its central parts warehouses in Bavaria, as well as at major RDC locations around the world, from South Korea to Malaysia and South Africa. The ConDC concept will be expanded for North America as well as being rolled out to China, he confirmed.

“These warehouses will be supplied with Nafta [North American Free Trade Agreement] and later Asia-sourced parts and will distribute those spare parts to the corresponding regions as well as to the central distribution centre in Bavaria,” said Baumann. 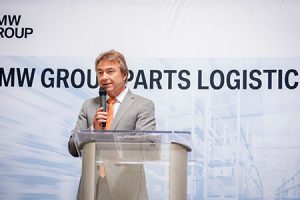 Baumann: new site will allow BMW to avoid sending parts from North America to Germany and then back again

By introducing local supplier and export functions, as well as quality control, the ConDC will eventually carry out functions similar to BMW’s CDC in Germany, using the same processes, he added.

The ConDC is set to handle about 4,000 part numbers from around 250 regional suppliers. While this is a small proportion of BMW’s 400,000 or so active part numbers across its model range, it is expected to grow further thanks to further expansion at the Greer plant, where production of the new X3 has just begun; next year BMW will add output of the X7 there.

The carmaker has just announced an additional investment of $600m at the plant and around 1,000 new jobs to support the move.

The number of North American parts is likely to rise further as BMW adds new models to Greer, and could expand still more once BMW opens its second North American manufacturing plant in San Luis Potosí, Mexico, in 2019.

Growing into an export centreBMW is launching the Spartanburg ConDC in three phases, according to Baumann. In the first, it receives US-based suppliers only and acts as a crossdock for US RDCs, with inventory staying at the facility less than 24 hours. This operation covers 7,500 sq.m (81,000 sq.ft).

With volumes still in a ramp-up phase, the ConDC is currently receiving around 10-15 trucks a day and dispatching around seven, including two to BMW’s largest US RDC in Nazareth, Pennsylvania. This will rise as full operation is achieved, which is expected by the third quarter of the year.

In the second phase, set to take effect within the next two years, the ConDC will also carry supplier inventory destined for the RDCs, and expand to take up 11,000 sq.m, said Baumann. It will also increase coverage to include suppliers from Mexico and Canada, with eventual plans to distribute to customers across the continent as well.

In a third phase, the ConDC will become the centralised export centre for North American-sourced service parts, shipping material to the CDC in Germany, as well as exchanging parts with the China ConDC. “That is our major objective, and what we have now is a precursor to that,” said Baumann.

Baumann told Automotive Logistics he expected the third phase to begin by the end of the decade, by which time BMW will have also launched the China ConDC, the location for which is currently being decided.

BMW currently carries out some local supplier sourcing for Chinese spare parts at its RDC in Shanghai, said Baumann, but it is not yet carrying out the same type of activities as it does at the US ConDC, such as quality inspections.

Tim-Oliver Kirschbaum, manager partner at Senator International, said the ConDC was the first warehouse operation it had run for BMW globally. The logistics provider is already active with BMW in a variety of forwarding activities, however, including a contract earlier this year to consolidate air freight activities out of Europe for the Greer plant, with two flights per week arriving in the local airport in Spartanburg from Frankfurt-Hahn, in Germany.

Senator has leased around half of the 34,000 sq.m facility and has space to grow there for BMW. It also runs air and ocean freight forwarding activities separate to BMW at the same location.

“Besides the monthly running costs, we have invested $1.5m for the implementation of machinery at the warehouse,” said Kirschbaum at the ConDC opening ceremony.

Boosting quality and logistics efficiencyBMW’s centralised approach to service parts in consolidating global shipping flows to RDCs is not unusual in global OEM service parts networks. Carmakers including Daimler and Volkswagen Group run similar operations. It has been effective up to now for North America, combining globally sourced parts with BMW’s core supply out of Germany and central Europe. As more than 70% of X-model SUVs built in Greer are exported, most service parts sourced in the US are also bound for overseas markets, and benefit from centralisation at the CDC.

However, with the strong growth in production at the Greer plant and its local supply base, as well as an increase in X-series sales in the US, there was a clear business case in bringing the service parts supply chain closer to suppliers and customers. 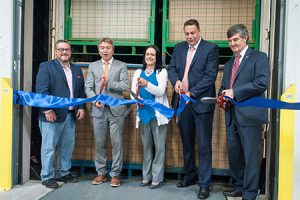 Baumann pointed to inbound delivery lead time reductions of up to 80% for US-based supplies, with related savings in logistics costs and emissions. He also stressed the significance of the quality control operation at the ConDC, which includes verification of quantities and part numbers, inspection for damage or faults, and even packaging engineering.

These activities help BMW identify parts quality or shipping issues much sooner. “By doing this quality control earlier, we pick up on errors much earlier than when we shipped the parts first to Germany, and we avoid shipping the fault onward,” Baumann said. “Because we are handling a portion of parts that are shipped from the US to Dingolfing for global export, we are also able to identify problems before further shipments.”

That was certainly the case when quality managers at the site recently discovered a fault on hoods (bonnets), which they were able to address and fix directly with BMW and its supplier.

Operators at the plant also carry out a number of packaging processes, from applying a new protective film to windscreens to verifying and developing packaging materials and dunnage for new parts.

According to Baumann, implementing the ConDC has been a highly complex process across BMW’s aftersales, manufacturing and logistics operations, which has included integrating it into BMW’s SAP system and coordinating supply planning and ordering at the BMW plant and with suppliers. Further work will be done to support export processes that, up to now, have been handled out of Germany.

Baumann said the work would help improve the overall network over the coming decade.

“To increase customer satisfaction, cost efficiency and sustainability, our North American service parts operations needed to be future-proofed,” he said. “That is exactly what we are doing.”