BMW to subcontract additional X1 output to the Netherlands 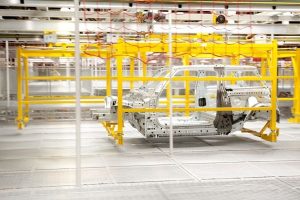 The VDL Nedcar contract manufacturing plant in the Netherlands will start assembly of the BMW X1 this August to serve local and global export markets, sharing output with BMW’s plant in Regensburg in south-east Germany, the carmaker has confirmed.

By sharing production of the model at the Dutch plant, close to the border of north-west Germany, BMW is set to introduce more cross-shipping of parts for suppliers that already serve primary X1 production in Regensburg, while increasing vehicle exports from the Netherlands.

Nedcar already produces three BMW Mini models, for which it shares a tightly bound supply chain with Mini’s main production and supply locations in the UK.

The Regensburg plant has been a partner plant with Nedcar since 2014, according to BMW, with the plants sharing processes and technology in production and supply.

In a statement, BMW said strong global demand for the X1 required extra capacity to supplement production at Regensburg, where the current generation of the model has been built since 2015 and which is already at full capacity, assembling eight different models on a single line.

The X1 has enjoyed strong growth over the past year, particularly in the US, where sales reached a new record in 2016 of 27,812 units, a near-93% increase over 2015, according to the company.

BMW stressed that Regensburg would remain the primary plant for the X1, while production in the Netherlands would allow BMW to respond more quickly to global market demand.

BMW has used the Born-based factory, which previously built cars for Mitsubishi, as an extension of Mini output since 2014. Since then, it has split output of the Mini hatchback between the Mini plant in Oxford and Born, while it added a convertible in 2015 and the Countryman in 2016. Later this year the plant will also add a hybrid and sport version of the Countryman.

This spring, BMW is slated to start assembly of the 5 series at the Magna Steyr contract assembly plant in Graz, Austria, where the carmaker previously built several Mini models. Jaguar Land Rover, Toyota and Daimler are also building models at the Graz plant.

Daimler, meanwhile, is adding output of the new GLC SUV at Valmet’s contract manufacturing plant in Uusikaupunki, Finland, near the country’s west coast, which already produces the A-class model.

Such contract manufacturing usually relies on single sourcing of components from the tooling and primary suppliers for a model’s main production plant, and thus may have longer supply chains and logistics routes.

Although BMW has not yet confirmed its supply chain and logistics arrangements for X1 production in Born, the precedent for Mini models at the plant, and assembly in Graz, suggest that it will follow a similar pattern, including the use of ‘pearl chain’ deliveries, also known as long-distance, just-in-sequence supply, in which parts are packed in order of production sequences and move almost directly to the assembly line from receiving yards.

In a recent interview with Automotive Logistics, BMW’s senior vice-president of logistics, Jürgen Maidl, acknowledged the pearl chain strategy for other co-located models, such as the 5 series between its main site in Dingolfing, Germany and Graz, or in the future the 3 series between Munich, Mexico and China.

While such pearl chains allow BMW to use the same set of suppliers for multiple locations, the long lead times also increase the pressure on logistics to pack parts accurately, meet delivery times and manage engineering changes. Maidl highlighted new systems and processes at BMW to increase visibility and improve planning accuracy to better manage this process.

BMW has previously confirmed to Automotive Logistics that Mini production in Born shares a large number of suppliers and logistics providers with the UK, including those serving Mini component and powertrain plants in Swindon and Hams Hall.

As the plant’s first brand outside Mini, X1 production will introduce new suppliers and delivery routes to Born. Links between Regensburg and Born, however, should already be strong thanks in part to their status as partner plants.