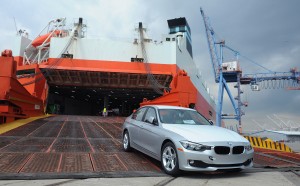 Between now and 2016, the German carmaker’s facility, which is being managed by logistics provider Wallenius Wilhelmsen Logistics (WWL) under a new contract, will import around 166,000 BMW and Mini vehicles.

The facility will provide a full range of on-site services including vehicle inspection, mechanical and paint/body repairs, accessory installation, vehicle programming, and vehicle maintenance. Located at the largest car processing port on the east coast, BMW’s new facility will serve 96 dealers within the central and eastern regions of the US.

“This is the front line of our customer service effort, especially for our customers in the central part of the US,” said Craig Westbrook, aftersales vice president of BMW North America. “Our new Baltimore port facility is dedicated to receiving from overseas, rapidly preparing and then quickly delivering new vehicles to our customers and dealers.”

The opening of the VDC follows the announcement in May this year that BMW had signed a vehicle processing contract with WWL. Mercedes-Benz used to process BMW imports at its terminal in Baltimore, but the OEM terminated the agreement at the end of May 2014, before WWL took over.

Kenn Sparks, a spokesperson for BMW North America said that Mercedes-Benz decided to end the contract early. Sparks said Mercedes-Benz “gave us more than six months’ notice. Both companies decided to move in a different direction and therefore we agreed to dissolve our joint operation.”