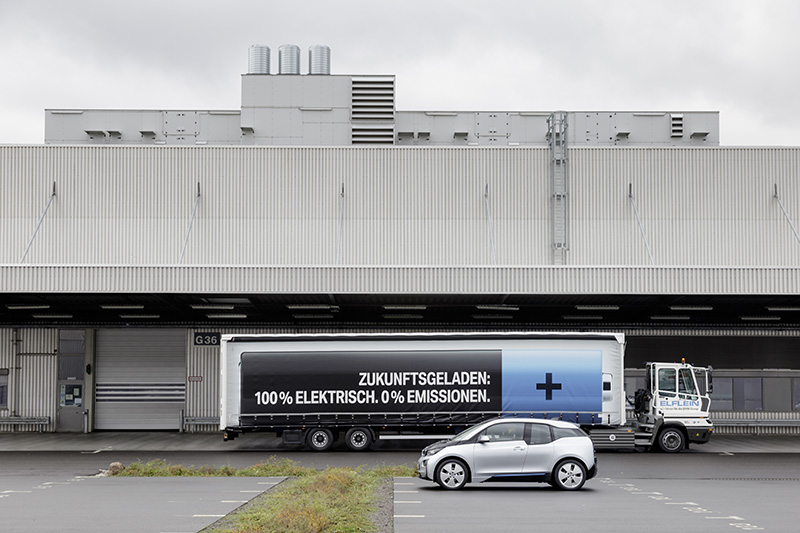 In the search for emissions savings, a fully electric 40-tonne truck from logistics provider Scherm is being used to deliver parts from suppliers to BMW’s plant in Munich

Not every aspect of BMW's Connected Supply Chain has to do with advanced automation or digital systems. Environmental sustainability is also an important focus. While using technology is part of this, such as electric trucks or more visibility to avoid wasteful transport, ‘analogue’ efforts are also underway, notably to increase rail transport.

Reducing carbon emissions has received high-level attention at BMW, with progress measured in an annual sustainability report. The most recent data available shows the carmaker has been making progress, with logistics playing a significant role. For example, despite growing production and sales volume in 2015, carbon emissions across inbound and outbound logistics between 2014 and 2015 dropped by 120,000 tonnes. The triggers for this reduction help explain why BMW is focused on more visibility in the supply chain and smarter transport planning.

The OEM’s total transport volume in 2015 was 40 billion tonne-kilometres (measured by multiplying the total load carried by total distance covered). While air freight accounted for just 0.6% of that total, it represented 12% of total emissions from logistics. Road also has a disproportionate impact, while sea and rail freight – though it depends on fuel sources – generally reduce emissions relative to their volume (see chart below).

Decreasing air freight has thus become a priority for logistics. Jürgen Maidl, senior vice-president of logistics at the OEM, says BMW has reduced the amount significantly from years past and air freight is now at a fairly acceptable level, especially as it includes parts normally shipped by aeroplane, such as microchips.

“What we had a few years ago was not acceptable, and that is why we started to bring in a version of this Connected Supply Chain,” he says.

In future, more transparency in the supply chain, and the automated or quick diversion or reordering of parts, could reduce air freight levels even further.

Shifting more parts and vehicles to rail freight is also a target. The use of a specialised inland port close to its plant in Greer, South Carolina, for example, has allowed BMW to switch from road to rail for imported containers through the port of Charleston and for knockdown kit exports from the plant.

BMW has also regularly used the Trans-Siberian railway to move parts from German plants in Leipzig and Regensburg to its joint-venture plants in Shenyang, in north-east China. The journey, at 23 days, is around half that of ocean freight. While it is not cost- and scale-effective enough to replace container shipping, it is a good alternative to air freight to moving more time-critical parts.

“We always recalculate whether it is better to have a faster route via the Trans-Sib or by ship. We typically use it for parts that require some changes, so that we can benefit from the faster transit time,” says Maidl.

If BMW were to move the 2,500 containers of material shipped by rail each year to China by air freight, it would emit around 100,000 tonnes more CO2 annually.

For outbound, after years in which the share of vehicles leaving BMW plants by rail fell as production grew globally in places where rail was less common, such as China, today 63% of vehicles leave by rail. Over the past decade in Europe, meanwhile, the carmaker has been shifting the great majority of vehicles moved by rail into covered rather than open wagons, which Maidl says reduces damage and the need for further cleaning.

The carmaker has also explored using the Trans-Siberian for finished vehicle exports from Europe to China, with trials to Chongqing in the south-west. However, the flow has not proved as effective as ro-ro transport.

“It required too much handling. First you have to move the vehicles to Duisburg, in northern Germany, and then pack them into containers, and at destination in Chongqing you unpack them, and put them on a truck,” says Maidl. “Perhaps when a roll-on, roll-off train is available, we could look at it again.”

Alternative fuels are also playing a larger role in logistics. In 2015, BMW and logistics company Scherm introduced a fully electric, 40-tonne truck to deliver components from Scherm’s logistics centre to the carmaker’s plant in Munich, making it the first in Europe to use larger electric trucks for materials on public roads. The truck, which takes 3-4 hours to charge, has been successful for defined, point-to-point routes, and its use will be extended to other operations in Germany, such as Landshut and Leipzig. There is also a project to transport finished vehicles on electric trucks.

BMW has also looked at increasing renewable fuel sources for its rail transport. As well as routes where finished vehicles move by carbon-free rail services, the carmaker has switched its movement of containers for export from Bavaria to northern German ports to CO2-free electricity by rail, a volume of more than 70,000 containers per year.