Car assembly resumes after energy squeeze in US 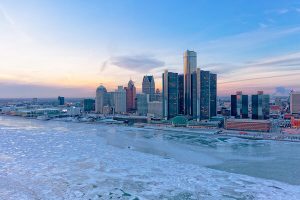 GM, Ford and FCA have been re-establishing normal production operations in Michigan after an energy supply shortage brought on in part by the extremely low temperatures that have swept across parts of the US recently.

Temperatures as low as -25°C (-13°F) in Detroit – caused by a weather phenomenon known as a Polar Vortex – compounded energy supply problems following a fire at a compressor station operated by natural gas supplier Consumers Energy. Though the blaze was soon brought under control, the station had to be taken off line so the fire damage could be repaired.

In order to cope with extra domestic demand during the sub-zero temperatures, Consumers Energy asked carmakers to reduce their production.

General Motors suspended operations at 13 of its factories on January 31, as well as three other locations. But most manufacturing plants and some critical labs, testing and other specific sites were scheduled to resume activities on February 1, the company said. The exception was the Lansing Grand River stamping plant, which was due to restart today (February 4).

Office workers at GM’s Technical Center in Warren, Pontiac Engineering Center and Grand Blanc aftersales headquarters were asked to continue working from home on February 1, but normal operations were expected to resume over the weekend.

A Ford spokesperson told Automotive Logistics it had lowered the temperature at its Livonia and Van Dyke transmission plants to minimum levels, stopped heat treatment processes at the Sterling axle plant, and halted the paint process and parts of the stamping operation at its Michigan assembly plant – all at Consumers Energy’s request.

Ford will continue to work with the gas supplier in the days ahead, the spokesperson continued, but all other plants were operating normally.

The company had to close several offices in Dearborn due to a power outage suffered by another energy provider, DTE, however.

Fiat Chrysler Automobiles (FCA), meanwhile, reportedly cancelled two production shifts on January 31 at its Warren truck and Sterling Heights assembly plants. The company later announced it was preparing to reopen those factories for the first shift the following day.