China conference: catching up with digital and automation trends 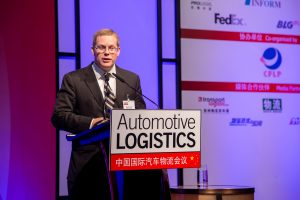 Steve Dyer, from Bain & Company, said China had a long way to go in catching up to the US and European productivity

Despite China’s reputation as a manufacturing powerhouse, filling the world’s homes and stores with products ‘made in China’, rising labour and production costs are increasingly a competitive threat to the country’s firms, whether from emerging low-cost countries in South-East Asia and Mexico, or high-tech centres like Germany and the US.

That, at least, is the view of the Chinese government, and why last year it launched an official manufacturing modernisation programme, ‘Made in China 2025’, aimed at improving China’s production and supply chain productivity over the next decade, according to Steve Dyer (pictured), partner at analyst firm Bain & Company. The programme is the Chinese answer to Germany’s ‘Industry 4.0’ initiative or ‘Advanced Manufacturing’ in the US.

Speaking at the Automotive Logistics China conference in Chengdu, Dyer said that although China has had high productivity growth, the country has a long way to catch up. China’s overall productivity level is currently ten times lower than the US, and behind France, Germany, the UK, Japan and South Korea (although for modern car factories, its productivity levels are much higher, with some even equal or better to Western equivalents). Following decades of fast productivity growth, this increase is forecast to slow, from 8.3% per year between 2011-2015, to 6.2% between 2021-2025.

‘Made in China 2025’ could play a significant role in the country’s development. The scheme will use subsidies, policy initiatives and other methods to encourage manufacturers to upgrade their factories and better integrate IT and internet-based services. “As growth slows in China, the government is promoting digitalisation to help restructure the economy,” Dyer said.

He added that China’s programme would focus on catching up in areas of automation and IT, as well as introducing more green principles in manufacturing. However, Dyer also suggested that China’s automotive supply chain will be impacted by major digitalisation trends over the next five years, with the main focus for the sector on the Internet of Things (IoT), ‘big data’ analytics and smart robots.

While the government will be encouraging the industry to invest further in new technology applications, carmakers are already adding more automation and connected technologies to their manufacturing and logistics operations. Currently, these technologies may be more focused on “industry 3.0 or 3.5”, according to Dyer, but they are significant nonetheless.

Chery Jaguar Land Rover (CJLR), which opened a new plant last year in Changshu (close to Shanghai), included high levels of automation, advanced material handling technology and logistics tracking for its production. Rui Zhu, director of material planning and logistics, said that the OEM had studied other manufacturing sites to see what technology other OEMs were using, including automated processes for receiving and line feeding, automatic guided vehicles (AGVs) and new techniques for tracking material and vehicles in transit.

Automation levels at the plant are already high, according to Rui. “If we work three shifts a day, we need three sets of workers… but AGVs work 24/7,” he said.

The plant has also switched to paperless processing, and uses RFID scanning for parts coming in and out of the plant. It introduced mechanical washing machines for returnable packing to reduce handling costs and reduce space, while e-frames improve work efficiency and reduce aisle width.

For inbound logistics, CJLR has 36 local suppliers at different distances from the factory, using a control tower to monitor real-time locations. “Each truck has a GPS system which shows possible delays or postponements, and we have a plan B on site to deal with any delays,” Rui said.

On the outbound side, Chery JLR uses a tracking system that uses GPS to monitor locations, as well as monitoring driver details, destination, speed and other aspects.

Xu Guangqing, managing director for logistics engineering and operations at SAIC GM, also emphasised the importance of automation in automotive logistics as a means to stay competitive in China. At SGM’s main manufacturing base in the Shanghai region, labour costs are high, and robots can be used to supplement human labour. The plant runs on three shifts, so working intensity is high, and AGVs can help the OEM to save money.

“Currently we are still focusing on the reception, storage, feeding and off-line,” said Xu. 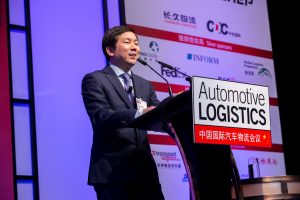 Xu admitted that the US and Germany are still way ahead in terms of such automation, however SGM is working hard to catch up. He hopes to move towards better inbound visibility, as well as introducing automatic parts receiving, storage, packing, feeding, and shipping. Some conveyors and robotic sequencing are in use already at GM plants in China, but automated receiving and picking is far from complete, Xu said. The OEM is using RFID for finished vehicle storage, but Xu said that some automation is still too expensive to invest in.

He added that rotary warehouse systems, automatic plants, intelligent AGVs, and intelligent wearables will grow in popularity in the next 3-5 years, and will help to analyse big data more effectively.

“This will be very efficient to enhance technology,” he said.