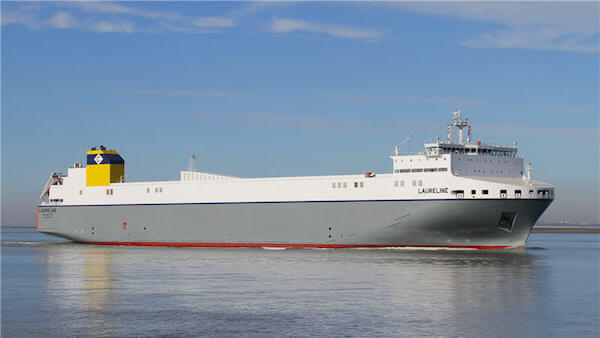 Luxembourg-based shipping line CLdN has begun running three times a week in each direction on its ro-ro service between Zeebrugge in Belgium and Santander in Spain.

The move follows the division of its previous twice-weekly service linking Santander, Rotterdam in the Netherlands, and Leixões in Portugal into two distinct routes last September, which saw it start up the new short-sea freight service to Santander with two calls a week.

The increase in frequency on the Zeebrugge-Santander route is based on new ro-ro vessel Laureline (pictured) joining the fleet. The service caters for the shipping of cars, trailers, containers, machinery, breakbulk and project cargo.

The additional sailing each week will allow customers to rotate their cargo in a faster and more efficient way, resulting in improved transit times and cost optimisation, said CLdN. It will also help CLdN compete with existing connections between Zeebrugge and Northern Spain operated by Finnlines, EML and UECC.

Among other organisational changes, CLdN is also to begin grouping non-UK services on the Albert II Dock in Zeebrugge, with UK-bound sailings on the Brittannia Dock. CLdN said it would release more details of these plans in due course.

The port of Santander is strategically well located, being connected via toll-free roads with a number of Spanish industrial centres such as Madrid, Barcelona and Zaragoza.

For more on operations at Europe’s leading automotive ports, watch out for this year’s European Vehicle Ports Survey in the April-June edition of Finished Vehicle Logistics.