Component makers start to invest as Ukraine’s economy picks up 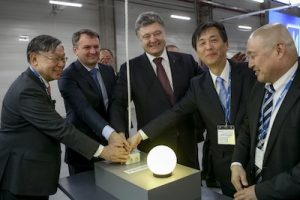 The first signs of a recovery in the Ukraine automotive industry have begun to appear after several electric automotive components manufacturers recently announced plans to invest in plants in the west of the country with a view to exporting across Europe.

In the last few years, the automotive industry in the country has all but collapsed, with annual car production falling to around 8,250 units last year from 76,300 in 2012, according to official figures.

Japanese firm Fujikura, however, has invested €6m ($6.8m) in an 11,5000 sq.m facility for the production of automotive components near Lviv, on Ukraine’s border with Poland. The facility, launched in the middle of April, will focus on production of electrical equipment, telecommunications systems and components for export to several automotive plants in Europe.

The opening of the facility was attended by Ukraine’s president Petro Poroshenko (pictured, centre), who said it was an important milestone for the country’s automotive industry and a positive sign for investors interested in setting up business in Ukraine.

Expansion plansSeveral other projects have also been announced recently, including one by Kromberg & Schubert, which is to commission its second plant in the country in June this year. The company is investing around €30m in the plant in Zitomir, which will make onboard cable systems for Daimler, BMW and Volkswagen and will also focus on exports.

Alexander Sharvarsky, chief finance officer at Kromberg & Schubert Ukraine, said that over the past 10 years the company had reached maximum capacity at its existing plant in Lutsk. He added that the new facility would employ 800 staff initially, growing to 8,000 by 2021.

Meanwhile Leoni has said it too will expand in Ukraine with an investment of €15m in a second facility in Ivano-Frankovsk Oblast for the production of automotive wiring. That plant will create 8,150 jobs.

Leoni already has a facility in Lviv Oblast, which imports materials from Germany, France, Spain and the UK and exports finished products to Germany, Belgium, the UK and Poland.

Experts suggest production of automotive components in Ukraine is becoming more attractive because the county’s economy is now showing signs of stabilisation, while the free trade zone agreement with the EU and the weak hrvynia are helping to keep production and logistics costs in check.