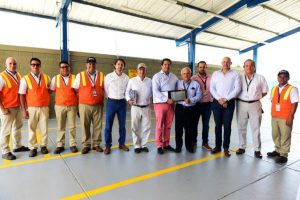 Contecar, the marine terminal operator that supports vehicle handling operations at the Colombian port of Cartagena, has opened a dedicated storage area for Renault.

The facility is handling volumes from the carmaker’s plant in Evigado, just outside Medellin, that are being exported to Mexico and the Caribbean. The models involved include the Clio, Logan, Sandero and Duster. The facility also handles imports into Colombia.

Contecar said the facility, which opened in the middle of December after six months’ construction, had 2,650 parking spaces.

Sebastian Gómez, commercial director at Contecar, said his company had been working with Renault since 2006 but has been developing a dedicated ro-ro terminal since 2010. The paved compound covers five hectares accessed through four gates, added the company. The storage facility also offers value added services, including final preparation of vehicles ahead of delivery to dealerships.

At the inauguration of the facility in December, Matthieu Tenenbaum, president of Renault Colombia, said Cartagena port offered the company opportunities to be more competitive and to consolidate its logistics activity.

Gómez said the port of Cartagena handled around 80,000 vehicle units annually for customers including Renault, GM, Toyota, Volvo, Mercedes-Benz and Suzuki. It has a total dedicated vehicle handling space of 25 hectares at the port and can store up to 9,000 vehicles.

The main shipping lines serving the automotive sector at the port are Mitsui OSK Lines (MOL), NYK, Höegh Autoliners, K-Line and WWL. According to Gómez, the port deals with eight to ten ro-ro vessels monthly, with an average of 800 units per vessel.

According to Contecar, the port is the only one in Colombia that has a dedicated terminal for loading and unloading finished vehicles and other rolling cargo.