Daimler shifting some van production from Germany to NAFTA 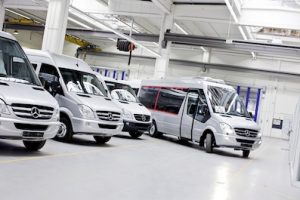 Daimler has announced that it will localise the next-generation Mercedes Sprinter van in North America in full part-by-part production, while investing further at its main German van plants in Düsseldorf and Ludwigsfelde.

The OEM has not said where future production will be, including whether it will be based in the US, Mexico or Canada, but will release details of the exact location in the coming months. Until now, Mercedes' Sprinters for the US market have been built only on a knockdown basis for high import tariffs on commercial vehicles; the Sprinters are first produced at the two German plants and then partly dismantled, before being reassembled in Charleston, South Carolina.

However, in a statement the company admitted that this process has resulted in a significant competitive disadvantage in the US for Mercedes, as it has led to longer delivery times. It has also made the vehicle more expensive for customers in the US, and consequently is not economical in the long term, especially with the expected growth in demand.

Volker Mornhinweg, head of Mercedes' van division said, "We can cover the growing demand for large vans in the North American market economically, only if we produce the vehicles locally in the NAFTA [US, Canada, Mexico] region."

Daimler currently has passenger vehicle and truck production plants in the US, as well as commercial vehicle production in Mexico. This past summer, it announced that it would start building Mercedes-Benz passenger cars in Aguascalientes, Mexico.

The Sprinter van is the global market leader in the large van segment and is delivered in around 130 countries worldwide. North America is the Sprinter's second-largest sales market after Germany, with around 23,000 units being delivered to US customers last year.  Mercedes hopes to more effectively benefit from the high growth rates in the US market in the large van segment by localising production in NAFTA, where it will also be able to benefit from the region's free trade agreement.

Although some production is shifting to the US, Daimler will continue to build Sprinter vans in the Düsseldorf and Ludwigsfelde factories, with plans to invest €450m ($570m), modernising the body shop, paint shop, and assembly line. Around 150,000 large vans are produced annually at Daimler's biggest van production plant in Düsseldorf .
Outside Germany and the US, Sprinter vans are also assembled in González Catan, Argentina; by Fujian Daimler in Fuzhou, China; and by Gaz Group in Nizhny Novgorod, Russia.