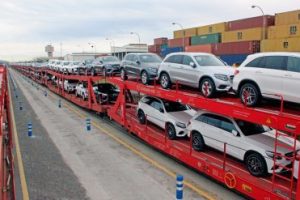 DB Cargo is running a rail service for finished vehicle transport between Germany and the Spanish port of Barcelona. The weekly service, for a prominent German carmaker (unconfirmed but thought to be Mercedes-Benz), is the only such link between the two countries and is organised in conjunction with the Spanish state railway – Renfe – and the port of Barcelona’s two specialist finished vehicles terminals: Autoterminal and Setram.

The service is currently running weekly from Kornwestheim rail terminal north of Stuttgart in Germany but this is eventually expected to increase in frequency by the end of the year. A spokesperson for DB Cargo said that the service would support the movement of 40,000 vehicles a year.

The port of Barcelona is the only such facility in Spain, so far, that is connected to the main European railway network, given that standard gauge rails actually enter the port. All other Spanish ports have Iberian broad gauge track, which is incompatible with the network that covers most of Europe.

The initial service left from the Kornwestheim rail terminal with a trailing load reaching 685 metres, making it the longest ever standard gauge train to operate in the Iberian Peninsula. Significantly, the finished vehicles that were brought to Spain were then distributed across the Spanish market, rather than being transhipped to vessels for onward transport. Consignments of around 250 units will be the norm in future.

In 2017, 32% of all finished vehicles handled by the port either arrived or departed by rail.