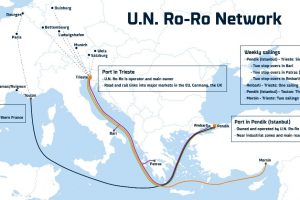 DFDS said the purchase would make it a major player in the growing trade between the EU and Turkey including for parts and vehicle trade.

U.N. Ro-Ro operates five routes connecting Italy and France with Turkey. It operates 12 ships and manages port terminals in Trieste, Italy and in Pendik, near Istanbul in Turkey. The routes connect the Turkish ports of Pendik, Ambarli and Mersin with Trieste and Bari in Italy, Toulon in France and Patras in Greece. In cooperation with rail operators, U.N. Ro-Ro also offers intermodal transport between key EU markets and the ports.

“Turkey's economy is among the world's 18th largest,” noted Niels Smedegaard, CEO and president of DFDS A/S. “Trade with the EU is extremely dynamic. Since U.N. Ro-Ro was founded in 1994, seaborne trade has continued to take market shares from road transport where congestion, border controls and customs formalities hinder the flow. Today, 55 % of the trade is seaborne – and the share continues to grow, benefitting not least U.N. Ro-Ro, which is the major operator in this market.”

Smedegaard also said that the trailer and container handling that U.N Ro-Ro undertakes was very similar to DFDS' business in the North Sea as were the markets served, including automotive parts, vehicles, machinery and retail products, amongst others.

DFDS also pointed out that it was familiar with the ships U.N Ro-Ro used as they were all built at the Flensburg Shipyard in Germany where DFDS has also been building ships of a similar design.

“U.N. Ro-Ro is a highly profitable company, and we are confident that joining forces will create new exciting opportunities as we can expand services to new customers and combine the two sales organisations,” said Smedegaard.

The management of U.N Ro-Ro will remain in place and the company employs 500 employees.