Real-time tracking: Is it Here yet?

Real-time cargo tracking has always had its appeal. The problem has been finding a technology that could actually deliver on the aspiration 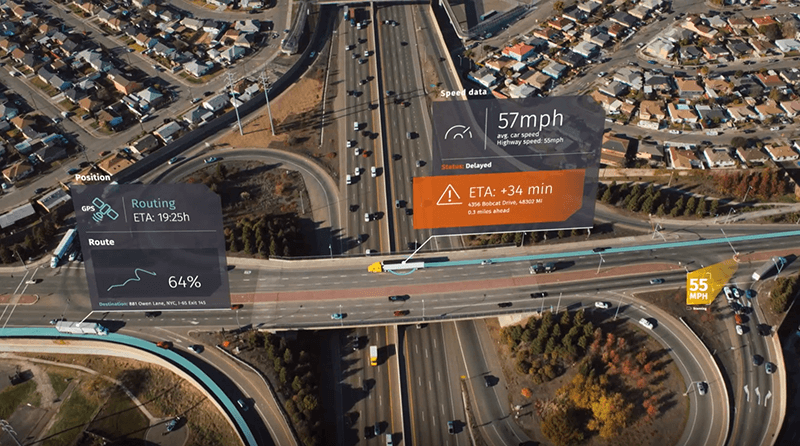 Real-time cargo tracking has always had its appeal. The problem has been finding a technology that could actually deliver on the aspiration. Take RFID, for instance. Initially seen by many as the way forward, the technology is still struggling to gain widespread traction, 20 years after first being mooted as the solution to the real-time tracking problem. Taking the blame have been such issues as readability challenges, the necessary infrastructure investment, the reliability of the devices themselves and the need for end-to-end connectivity along supply chains, if true end-to-end tracking data is to be captured – let alone captured and transmitted in real time.

“The automotive industry has been talking about RFID since the 1990s and we’re still waiting for it to revolutionise supply chain visibility,” comments Stephan Freichel, professor of distribution logistics at Köln University of Applied Sciences. “The problems that RFID was supposed to be addressing are still very valid: existing approaches are often very manual, prone to failure and don’t actually deliver true real-time visibility. Even today, barcodes are still the industry’s most prevalent track-and-trace solution – and as we all know, barcodes get damaged or accidentally covered up, need to be physically scanned, and are simply too paper-based and too manual.”

Finally, though, the problem of supply chain visibility may be looking less insurmountable; all of a sudden, say market observers, a confluence of disparate developments means that the era of genuine real-time track-and-trace may be here. To the rescue comes not just one technology, but several.

“Compared to 20 years ago, a lot of things have changed or improved – connectivity, for instance; satellite-based GPS technology; narrowband Internet-of-Things (IoT) via traditional GSM mobile telephony; LoRa low-power wireless technology; LPWAN low-power wide-area networks, coupled to energy harvesting via solar power or vibration energy; and big advances in ‘big data’ and data integration, coupled to advances in artificial intelligence and machine learning,” notes Jan Cirullies, head of logistics digitisation at Germany’s Fraunhofer Institute for Software and Systems Engineering. “We can detect patterns that we couldn’t detect before, helping to build even better business cases for investments in tracking technology. Put it all together, and the difference is transformational.”

Essentially, it is now possible for companies to bundle a collection of technologies together in a single, miniaturised device that may be no larger than a smartphone, and then build a mobile real-time track-and-trace solution that combines battery longevity with affordable data capture and reliable communication. Throw in a clutch of low-cost sensors in order to capture the environmental context of a shipment and the offering becomes even more capable.

“The price of sensor technology is dropping quickly, so as well as location information, devices can transmit data on temperature, humidity, light levels and shock,” notes Greg Kefer, vice-president of marketing with special responsibility for the GT Nexus commerce platform at enterprise applications vendor, Infor. “So the benefits go beyond just providing location information and extend to cargo condition, which is especially important in the food and pharmaceutical industries and in high-value supply chains generally.

“There’s also a choice of communication capabilities: some use very advanced GPS, others use the cellular phone network or even connect via Bluetooth or wi-fi to a truck driver’s mobile phone, and then communicate back to the control centre via that connection.”

The blockchain factorOn top of all that, there is now growing interest in blockchain ‘distributed ledger’ technology. Blockchains won’t solve the problem of identifying exactly where a shipment might be, but distributed ledgers do help businesses to encode a shipment’s movement and environmental condition history in a secure, immutable record.

American retailer Walmart, for instance, is using blockchain-based distributed ledgers to track products in its supply chains. In a demonstration to shareholders at the company’s annual general meeting, it took just two seconds to pull up every stage of a farm-to-retail store journey undertaken by a cargo of mangoes – in stark contrast to the six days previously required to find the information.

“The role that blockchain provides [in our tracking service] is delivering an assurance of reliability and accuracy, because as blockchain-based data can’t be falsified or manipulated, it’s a verifiable source of the truth.” - Chris Painter, Omnitude

In another example, fast-growing blockchain start-up Everledger maintains a global digital registry of more than a million diamonds, using distributed ledger technology to encrypt over 40 distinct features of each diamond on its journey from mine to jeweller’s shop, helping to keep so-called ‘blood diamonds’ out of buyers’ hands.

Such technology doesn’t just help companies to form a useable and cohesive view of their cargo flows, but also delivers an assurance of data quality. And while a real-time track-and-trace device can report its location and environmental conditions to a single reporting point, many other parties in the supply chain might be interested in that information.

Omnitude, billed as ‘a blockchain smart platform that connects blockchain technologies, e-commerce platforms and enterprise systems involved in building end-to-end supply chains’, aims to deliver that capability using the Hyperledger blockchain protocol, an open-source, globally collaborative project hosted by The Linux Foundation that is designed to enable business to consumer and business to business transactions.

“What we do is provide a middleware layer to tie all this device-level data together,” explains Chris Painter, Omnitude’s founder and CEO. “We can pull the data together from all the different sources that might be involved – manufacturers, shipping companies and the IoT-based location devices themselves – merge it, make it useable and then distribute it to the various parties that are interested in it. And the role that blockchain provides is delivering an assurance of reliability and accuracy, because as blockchain-based data can’t be falsified or manipulated, it’s a verifiable source of the truth.” 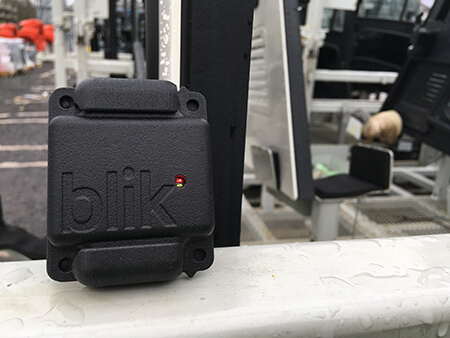 Real-time in real lifeSo, what real-time track-and-trace devices are actually out there and who is using them?

German technology provider Blik says BMW provides one good example. Presenting itself as a software developer rather than a location device producer, Blik was initially founded in 2016 to solve the problem of tracking internal movements within large automotive assembly plants, explains business development manager Frank Ruppert. The firm has worked in conjunction with BMW to develop a solution that leverages active location sensors and IEEE 802 wireless technology in the 2.4GHz band – a technology, he says, superior to both RFID and Bluetooth.

“With RFID, when you send a signal, all the RFID devices respond at the same time. With Bluetooth, while you can be selective, the technology tends to interfere with existing wireless local area networks. But with IEEE 802, it’s possible to transmit on frequencies that aren’t used by [other] wireless networks.”

Future development plans include fitting the location devices with movement sensors, so that they do not transmit if they are stationary for a time.

In addition to BMW, Blik devices are currently in use at Volkswagen and at industrial gases specialist Linde, though Ruppert says he is not at liberty to go into detail. Longer term, he says, the firm wants to extend the applicability of its technology to the broader supply chain, beyond the factory walls, and work is underway to develop the necessary technology to achieve this in partnership with the truck division of a large German vehicle manufacturer.

Here’s another solutionFurther examples are provided by US firm Here. Formerly known as Navteq, the company was acquired by Nokia in 2007, spun out of the struggling telecommunications firm in 2015, and, like some others in this field, is keen to distance itself from the mundane business of device production. Instead, Here describes itself as a digital mapping specialist. It is the provider of such technology in several popular GPS services and web-based mapping tools, like Garmin and Yahoo! Maps.

Here’s approach to the market is the reverse of Blik’s: it began with tracking across the broader supply chain and is now moving into assembly plants as it builds its mapping capabilities in respect of these more detailed, smaller-scale environments. Several automakers are piloting Here Tracking technology, says Di Paolo, but the company says it is not at liberty to disclose which ones. Here was sold by Nokia to Audi, BMW and Daimler, however, which may provide some clues.

Like Blik, Here has worked hard to extend battery life, in part by using its mapping technology to recognise when a container is at sea, and doesn’t need to make any further transmissions until it arrives. Programming interfaces to popular enterprise applications are available too: these enable the device to issue alerts if it strays outside the route corridor for a particular journey, for instance. And Here’s digital mapping heritage, claims Di Paolo, provides its solution with a granularity of location tracking that other providers may struggle to match.

So, is real-time location tracking – once the automotive industry’s unattainable dream – finally ready to take off? Some observers still seem to doubt it.

Matthias Berlit, for instance, vice-president of manufacturing logistics at logistics optimisation provider Inform, worries about the multiplicity of approaches being taken and the consequent lack of a single standard.

“What matters isn’t the location data itself, but what you can do with that data – and with the multiple approaches being taken, connecting together the various data flows and platforms inevitably becomes more complex,” he notes. “The more difficult the connection challenge becomes, the more difficult it then becomes to build a business case.”

Another problem is the sheer relevance of real-time tracking to the industry. In situations where in-sequence automotive supply chains are working normally – moving parts from nearby suppliers, crossdocks and supplier parks, for instance – there is probably little need for real-time freight tracking, says Richard Gane, director of sourcing and supply chain consultants Vendigital.

The one likely exception, says Gane, may be freight flows between Europe and the UK after its departure from the EU.

“Post-Brexit, if the customs delays and bottlenecks turn out to be as bad as is feared in some quarters, then all bets are off,” he says. “If that happens, then real-time tracking is going to see an explosion in demand.”

For now, however, it seems widespread demand for real-time tracking in automotive supply chains continues to remain just over the horizon. Despite the undoubted capabilities of today’s growing number of tracking systems, nobody can actually quite tell when this technology will truly arrive.

By design, says Arviem CEO and founder Stefan Reidy, the company’s ‘sweet spot’ is intermodal freight, generally at the level of the container. Next comes pallet-level and finally item-level tracking. But intermodal freight, he explains, is the core area the company addresses, because intermodal journeys tend to involve more complicated processes, where problems and delays more frequently arise.

Initially, says Reidy, Arviem saw itself as a pure-play service provider, selling location tracking services and data analytics services based on location tracking data, reporting such information as dwell times at various points in the supply chain, average transit times and environmental conditions. But that plan changed when the company found that the real-time tracking devices available in the marketplace were less reliable and less sophisticated than it wanted.

“We need a battery life that’s measured in months, batteries that aren’t based on lithium-ion technology if the consignment is to travel by air, and for the device to operate completely without any manual intervention. It needs to be able to figure out on its own that the journey has started,” says Reidy.

Getting what it wanted was proving increasingly problematic – particularly when its initial provider of devices went bankrupt, forcing it to seek a replacement provider.

”There was too much flux in the marketplace and too many shifts in strategy and technology,” comments Reidy. “We were always educating the suppliers.”

Arviem’s eventual solution was to design its own device, which leveraged Vodafone’s Managed IoT Connectivity service in order to ensure consistent, reliable connectivity anywhere in the world. Actual device production is handled by a third party.