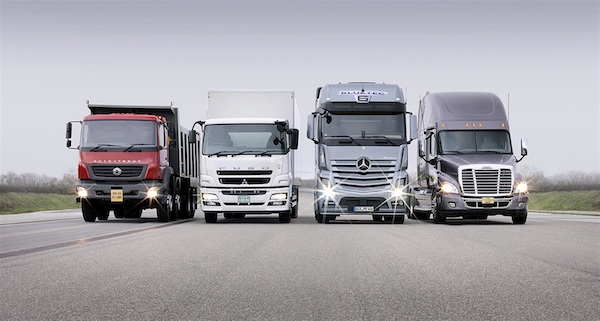 Loadsmart is a company that is “obsessed with” automating the full truckload shipment cycle, according to CEO Ricardo Salgado. A graduate of the Georgia Institute of Technology, Atlanta, and former leading principal at Goldman Sachs investing in transportation logistics companies, Salgado established the start-up in 2014 with the help of engineers from his alma mater. In continuing its development, the company has retained a strong core of technical talent, with around half of the workforce being engineers and data scientists.

Salgado regards the logistics industry as large, fragmented and technologically behind the times. “We’re in the middle of this technology revolution led by the consumer but the business-to-business side is lagging. So I found a unique opportunity to bring technology to this industry and that’s how I decided to build [Loadsmart],” he told Automotive Logistics at last year’s Supply Chain Conference in Atlanta.

He describes US-based Loadsmart as a logistics technology company which acts as a digital freight broker, connecting shippers and carriers by means of an online booking system which solves what he calls the “data aggregation problem”. It replaces the time-consuming and tedious process of comparing separate bids from different carriers.

“We want to basically grab all this underlying technology and make it much simpler and aggregate all this data and be able to provide and delight our customers with instant capacity nationwide,” says Salgado. The core format is web-based, since the primary user works in an office using desktop computers, but there is also a mobile app.

Salgado compares the system to booking a flight on Orbitz or Kayak, whereby a user inputs an origin and a destination and is instantly presented with prices for the available transport options. However, rather than just answering a single query, the solution needed to be scaleable to cope with the large number of bookings inherent in a logistics operation.

Therefore, when the user is sizeable enough to have a transport management system, the TMS automatically communicates with the Loadsmart server, obtains a price immediately and one-click booking can be completed within a minute. The next level of sophistication that can be achieved, says Salgado, involves inserting some artificial intelligence to remove the need for any human decision making at all.

Loadsmart serves a range of industries across North America, but for automotive it focuses on helping to manage the inbound supply chain. Finished vehicle logistics, which requires more specialised equipment, can also be supported but is not an area in which the company is actively working. Salgado notes that, compared with some other industries, automotive operates under extremely exacting standards.

“When you are managing the inbound [supply] into a manufacturing facility and it’s just-in-time, you have some margin of error but not a lot, so it means that your servicing needs to be exceptionally high; if you miss that tender you risk that the production facility might stop because you don’t have the parts that you need to manufacture. That is a big issue.”

One business that has seen the benefits of the system is Daimler Trucks North America (DTNA), which started working with Loadsmart in October 2017. “They are, in our opinion, one of the most ‘tech-forward’ companies that we work with,” says Salgado, emphasising that “You need that type of partnership and it needs to iterate.” Some clients, he explains, are not willing to push forward and collaboratively explore new ways of working.

The results from Loadsmart’s project with DTNA, he says, were not gained overnight but through weekly improvements achieved by repeated communication and collaboration between the two partners.

Technology plus talent
Not only Loadsmart’s technology but its innovation and energy were characteristics that attracted DTNA to work with the start-up, according to the OEM’s director of transportation procurement, Ivan Hernandez. “For a corporation as large as Daimler, it is sometimes difficult to find quick solutions to problems,” he explained at the Supply Chain Conference in May. 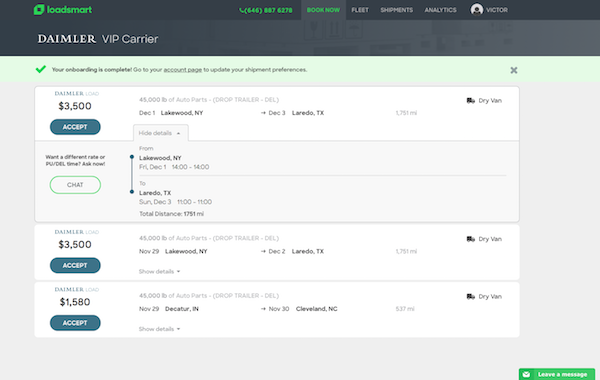 “Sometimes we have the talent in our organisations [but] that talent has to be inspired, and I think working with a start-up is a good way to show, ‘Hey, this is how a start-up does things, look at how quickly things can be done, an IT solution doesn’t require six months’. It was very refreshing.”

The partnership with Loadsmart started in 2017 when Hernandez and DTNA’s business development team were tasked by CEO Roger Nielsen with increasing customer participation in the movement of spot loads (since the truck-maker’s customers are also carriers). At the time, only 50% of loads were being transported by customers. Another key objective was to speed things up. “On average it was taking us five hours to secure the load and we also wanted to improve the process along the way,” said Hernandez. The timeframe for finding a solution was set at 100 days.

DTNA has a very defined structure for working with start-ups, according to Hernandez, but he says Loadsmart fitted the bill in a number of ways. From a corporate culture point of view, it offered agility, flexibility, engagement and an entrepreneurial spirit that could be transmitted to DTNA. “What we liked from the business side was the ability to have instant booking for spot loads, to track [shipments], to customise that tool to Daimler Trucks’ needs, and the chance – this is the most important – to match freight, because it opens up the possibility to reduce empty miles,” explained Hernandez, describing the movement of empty trucks as “an illness that we have in our industry”.

With OEM and start-up working closely together, DTNA’s carrier spot load platform was developed and implemented within 80 days. Thirty-one customers were invited to join at launch, with more subsequently added. The results were impressive: the participation of customers increased well over the previous 50% (to 75% by May 2018) while time to secure the spot load dropped from five hours to 18 minutes or less.

“Many new ideas came out of challenges that we were facing as we were implementing: ideas of developing a trailer-to-go model, matching lanes and collaboration,” said Hernandez. “Also, now we want to collaborate with other industries and other OEMs.”

Going to the next level
That sentiment seems in tune with the next step for Loadsmart as described by Salgado, which involves fully leveraging the benefits of what he calls “network layering”. No carrier uses the same routes, but by collecting up and processing data on logistical movements from multiple companies, it is possible to make collective gains. 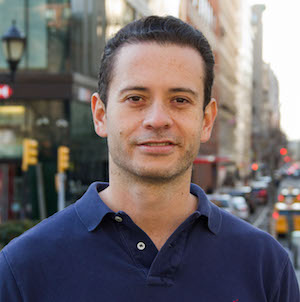 “Currently no motor carrier has visibility on more than 1% of the total class-8 trucks out there, but if you’re able to aggregate all this data and overlay these networks then you can rebalance [the overall] network and it becomes more efficient for absolutely everybody,” explains Salgado.

He says this will be particularly useful given the significant fragmentation of the logistics industry referred to earlier. “On the motor carrier side it’s exceptionally fragmented – 90% have six trucks or less,” he adds.

He has identified the benefits for shippers as improved pricing, capacity and reliability, while carriers are able to keep their trucks running, reduce empty trailer time and gain better loads at optimal times. Implementing such a system is not without difficulty, however.

“The biggest challenge, once again, is a data aggregation problem: that not everybody is sharing all that data.” Some companies, he says, do not feel comfortable about sharing their data, while large organisations may have too many structural layers to provide what is needed. “But once you do [share], you get these network effects.”

Salgado seems confident that this is something which will be achieved in the near future, considering that the sharing of data and assets is becoming culturally more normal, manifested in platforms such as Airbnb.

“Sharing of data [to this extent] is something that we haven’t seen five, even three years ago. People are starting to be more open to sharing data as they see more benefits,” he says. On the Loadsmart platform there are numerous shippers now that would previously never have shared their data, he argues, but have done so because they see the advantages.

Asked how Loadsmart can make sure to protect such data, Salgado emphasises the importance the company places on data security and points to a range of mechanisms already in place: a large contingent of engineers within its workforce, encryption, strict control over siloes of data, and stringent terms and conditions. According to Salgado, any slip up would be considered “as bad as somebody saying ‘We breached Google’”.

“It takes a lot of time to build a reputation and a second to lose it,” he notes – or, as long as it takes to complete a one-click booking. The success of Loadsmart’s project with DTNA has attracted attention from other vehicle-makers, and the company will be keen to build on its early progress. With the news at the end of last year that Maersk has now invested in the company as part of almost $22m worth of series A funding, Loadsmart looks set to do so.