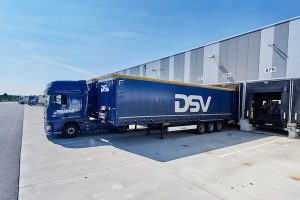 Danish logistics provider DSV has reached an agreement with rival Swiss firm Panalpina to merge operations following a takeover bid by the former worth $4.6 billion.

If the offer meets regulatory approval in June, the combined company will take on the name DSV Panalpina and by the fourth quarter of this year will become the fourth biggest freight forwarder globally behind DHL Logistics, Kuehne + Nagel and DB Schenker.

The combination with Panalpina is expected to increase DSV’s annual revenue by close to 50% to approximately 118 billion Danish kroner ($17.7 billion) and will result in a combined workforce of more than 60,000 employees.

“A combination of DSV and Panalpina further strengthens our position as a leading global freight forwarding company,” said Kurt Larsen, chairman of the board of DSV. “Together, we can present a strong global network and enhanced service offering to our clients, further solidifying our competitive edge in the industry. It’s a great match on all parameters. Panalpina is a great company and we’re very excited by the possibility to join forces and to welcome Panalpina’s talented staff.”

DSV was already one of the top five global logistics companies after a spate of buyouts including UTi Worldwide in 2015. More recently, in October last year, it made an unsuccessful bid for Ceva Logistics. The confirmation that it would buy Panalpina follows a $4 billion offer made in January this year.

DSV said its Air & Sea division (one of three) would grow to be one of the largest providers globally, handling close to 3m containers and more than 1.5m tonnes of air freight yearly. Additionally, its contract logistics capabilities are becoming more important as supply chains become more complex. The Solutions division, which covers warehousing and logistics, will be strengthened and Panalpina will bring additional warehousing capacity of more than 500,000 sq.m, according to DSV.

Peter Ulber, chairman of the board at Panalpina, said: “In the course of the past weeks, Panalpina’s board of directors and management have been exploring different strategic initiatives and held discussions with DSV about a potential combination. The board of directors’ assessment is that the updated proposal of DSV is very attractive. We are now looking forward to joining forces with DSV and contributing to creating one of the world’s largest transport and logistics companies.”

Approximately 20% of DSV’s overall takings are made through automotive services. The company has a roughly 60:40 split between OEMs and tier suppliers, with Renault-Nissan its biggest OEM customer.