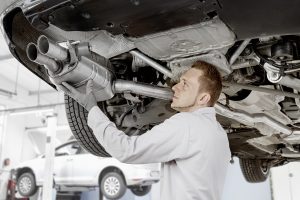 Tier supplier Eberspächer is building an exhaust component plant in Tondela, Portugal in response to new orders among carmakers on the Iberian Peninsula and Morocco. The new plant will add incremental production capacity and allow shorter delivery compared to Eberspächer's existing production sites in Europe.

The company has announced that a production and logistics centre is currently under construction on 11.5 hectares of land in the Zona industrial do Lagedo (Municipality of Tondela) in central Portugal. Production is expected to start in the third quarter of 2017, and will supply carmakers in Spain, Portugal and northern Morocco with hot-end and cold-end components for diesel and gasoline-powered vehicles, including exhaust systems, gasoline particulate filters and catalytic converters.

By the end of next year, Eberspächer expects to create around 120 jobs at the plant, with an expansion of up to 500 co-workers and an annual production capacity of 2.5m exhaust components by 2020.

“This represents the logical expansion of our European exhaust technology production network. At the same time we are bringing our products closer to customers on the Iberian Peninsula,” said Dr Thomas Waldhier, chief operating officer of the Eberspächer Exhaust Technology Division, in a statement.

In Europe, Eberspächer’s exhaust technology division currently has plants in Germany, France, Italy, the UK, Sweden and the Czech Republic. Across all three of its division in exhaust, climate systems and automotive controls, the Germany-based supplier has around 40 production sites in Europe, the US, South Africa, India and Brazil.

Anja Kaufer, a spokesperson for Eberspächer Group, told Automotive Logistics that the new plant will lead to lower logistics cost thanks to its greater proximity to carmakers in the region. However, she said that the company's existing production in France, Germany and the Czech Republic have been at full capacity and would not have been able to supply the newly won orders. Continuing growth in Spain and Portugal, for which both production and vehicle sales have been growing, also supported the decision to open the new plant.

Kaufer also confirmed that Eberspächer would work with a mix of global and local suppliers for the new plant in Portugal, including from its existing supply base in central Europe. "Costs for logistics are only one criteria in the consideration for the decision of each supplier," she said.