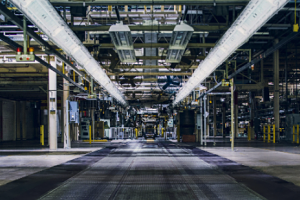 In July 2015, Mitsubishi confirmed it would end production of the Outlander model at the near 80,000 sq.m facility (pictured), its only plant in the US, switching production to Japan.

Mitsubishi originally established the Normal plant as a joint venture with Chrysler in 1988 called Diamond Star Motors, before Mitsubishi bought all the shares in 1991 and became MMNA; however, the plant continued to supply Chrysler until 2005. Its full annual volume reached 222,000 units back in 2000.

It was sold in April 2016 to Maynards Industries, a specialist in selling used facilities and equipment.

Rivian said it would create 500 jobs over the next five years as it launched production of its initial model. More than 1,000 jobs are planned when the company’s first product reaches full volume.

Kyle Ham, president and CEO of Bloomington-Normal Economic Development Council, said: “We are thrilled to see the plant being utilised once again.

“The plant has been a staple in our community for decades. With Rivian choosing to invest in the former Mitsubishi site, we begin a new chapter for the future for our workforce and community here in Normal.”

Vivian said it would invest at least $175m in the project with a plan to start customer deliveries by 2020. It said it was also working on attracting suppliers to the area, with the potential for key supplier partners to operate within the plant.

“We couldn’t be more excited to purchase this tremendous facility in the town of Normal,” said RJ Scaringe, founder and CEO of Rivian.

The company was founded in 2009 and currently has locations in the greater Detroit area and San Francisco Bay.

“In addition to the plant, this region has a talented workforce and is located within an extensive automotive supply base,” said Scaringe.

In 2010, electric vehicle front-runner Tesla acquired the former General Motors and Toyota production facility in Fremont, California. The company went on recently to acquire Grohmann Engineering, an automated manufacturing specialist, to help accelerate growth at the plant ahead of production of its Model 3 car.

Last week, Tesla and Panasonic also confirmed the start of mass production of lithium-ion batteries at the 'gigafactory' in Nevada. These batteries will be used in the Model 3 and in the company’s other energy storage products.

Meanwhile, in December, another electric car company, Lucid Motors, announced its start-up from scratch, saying it would invest $700m to build its manufacturing base in Arizona.