Mercedes-Benz making electric SUVs in US with local battery supply

Mercedes-Benz has started production of its EQS fully electric SUV in the US, supported by local lithium-ion battery supply. The new EV, and the forthcoming EQE SUV, will be made exclusively at the Tuscaloosa plant in Vance, Alabama, by Mercedes-Benz US International (MBUSI).

[Updated August 31] Lithium batteries for EV production at the plant are being supplied from the Mercedes-Benz Battery Plant in nearby Woodstock, which the company opened with battery specialist Envision AESC in March this year. The carmaker said it had invested $1 billion in the battery facility, logistics centres and the production line to make the EVs. 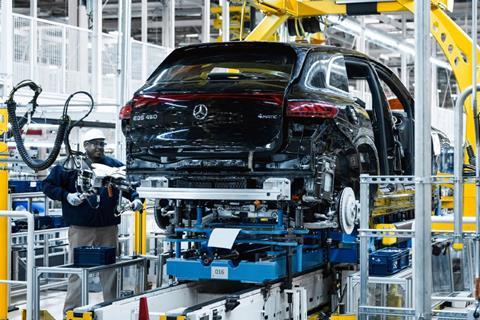 The battery facility is a short distance from the assembly plant along Highway US-11, enabling efficient deliveries by truck.  A spokesperson for MBUSI said that the company had its eye on carbon neutral logistics as part of Mercedes-Benz’s Ambition 2039 environmental initiative, which aims to ensure all of its cars and light commercial vehicles are carbon neutral, including in their production, and through inbound and outbound logistics.

”The aim is to launch a CO2-neutral fleet from 2039 along the entire value chain and the entire lifecycle, including CO2-neutral logistics,” said the spokesperson.

In line with its MO360 digitalised vehicle production process, Mercedes-Benz US International (MBUSI) is assembling the batteries using a digital system to combine a maximum of 12 cell modules into what is called the EE compartment. The modules are assembled into a complete system along a 300-metre production line with more than 70 workstations before being delivered just-in-time to the vehicle assembly line.

The 600 staff employed at the battery facility must complete a newly developed and comprehensive high-voltage safety training course, according to the company. The spokesperson for Mercedes-Benz said the company was spending time and effort on training courses, and ensuring the training was repeated regularly.

The company said that the flexibility of the networked MO360 production system has markedly improved productivity. According to Mercedes-Benz, quality improvements can be monitored and implemented across all of its passenger car plants. MO360 also provides each employee with customised information and work instructions in real-time.

Sustainable supply
The carmaker said its battery production at the plant was carbon neutral and that there were a number of sustainability initiatives supporting that. They include solar energy to heat captured rainwater, and LED lighting and ventilation in the battery assembly area. The forklift trucks used in the facility are also powered by hydrogen instead of diesel fuel.

The Bibb County site’s entire electricity needs will be met through renewable energy sources from 2024 onwards, once planned solar energy projects are approved.

Furthermore, working with Envision, the carmaker has managed to reduce the cobalt content of the lithium-ion batteries to around 10%.

The localised supply of batteries in Alabama connects the US plant with Mercedes-Benz’s global battery production network, which includes facilities in Kamenz and Stuttgart (Germany), Jawor (Poland), Beijing (China) and Bangkok (Thailand).

The production of EVs at Tuscaloosa is part of the carmaker’s global aim of making eight all-electric vehicles at seven sites on three continents this year.

As well as making the EQS and EQE, the Tuscaloosa plant continues to make the GLE, GLE Coupé, GLS and Mercedes-Maybach GLS.