GM has signed supplier agreement with US electronic subcomponents supplier Wolfspeed (formerly Cree) to secure the supply of silicon carbide devices that the carmaker said will enable it to install more efficient propulsion systems for its electric vehicles (EVs).

Cree officially became retitled Wolfspeed as of October 4 following a divestiture of two thirds of its business and its relaunch as a global silicon carbide provider. Wolfspeed has served as the brand for Cree’s silicon carbide materials and semiconductor devices business unit for the past six years.

Silicon carbide is a semiconductor base material with a wide range of applications across industry, and especially now in automotive. 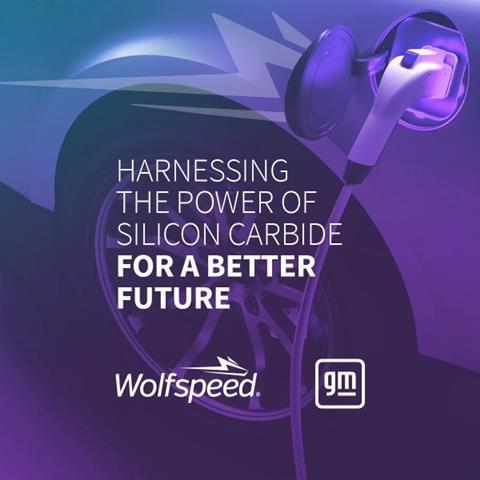 The silicon carbide supplied by Wolfspeed will be used in the integrated power electronics built into GM’s Ultium Drive units, which will power its next generation of EVs. The Ultium Drive combines electric motors and single-speed transmissions powered by lithium-ion batteries. GM is developing a modular architecture for its future EV production.

“Our agreement with Wolfspeed represents another step forward in our transition to an all-electric future,” said Shilpan Amin, GM vice-president of global purchasing and supply chain. “Customers of EVs are looking for greater range, and we see silicon carbide as an essential material in the design of our power electronics to meet customer demand. Working with Wolfspeed will help ensure we can deliver on our vision of an all-electric future.

As a part of the agreement, GM said it would participate in the Wolfspeed Assurance of Supply Program, which is intended to secure domestic, sustainable and scalable materials for EV production. All three are priorities for GM and other carmakers in the US as they currently struggle to secure adequate supply of semiconductors and other materials for the future of EV production. They are also key factors for the adoption of EV in the market.

Wolfspeed will be supplying GM with silicone carbide from its Mohawk Valley Fab in Marcy, New York, reputed to be the world’s largest silicon carbide fabrication facility, which will open in early 2022.

GM is investing $2.2 billion to convert the former Detroit-Hamtramck Assembly plant in Michigan into its first fully dedicated EV assembly facility. It will be supplying batteries to that facility from two battery plants currently under construction in Spring Hill, Tennessee and Lordstown, Ohio, both of which will be operated in a venture with LG Energy Solutions, the battery division of LG Chem.

LG Chem has been supplying lithium batteries for GM’s Chevrolet Bolt EV production at the Orion plant in Michigan. However, supply has been suspended until the companies can solve a problem related to the battery following a spate of fires affecting Bolt EVs.