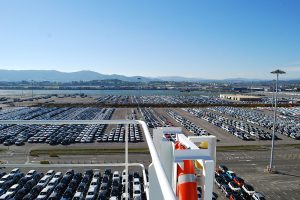 The contract involves mainly Renault and Nissan brands and covers around 160,000 import-export units a year from this year to 2019.

Bergé is already active in the port through its Port Operations (Operaciones Portuarias) business unit. With the new contract, it will be responsible for around 400,000 finished vehicles a year – 80% of the port’s anticipated total of 500,000 vehicles this year. Last year, Bergé handled 240,000 out of a total of 490,063 units passing through the port.

The additional traffic was previously handled by ocean forwarder UECC, using ports and transport operator Noatum as its Santander-based partner. The loss of the contract has forced Noatum to cut its driver pool by 50% to four, with around 100 stevedores also facing potential dismissal as Bergé makes use of its own staff.

In April, EML launched its Biscay Trade service, linking the ports of Zeebrugge, Southampton and Le Havre with Santander, involving calls on a four-day rotation, with vessels completing the entire loop in eight days. At Zeebrugge, there are connections with the company’s Scan Trade service, which serves Esjberg, Drammen and Goteborg in Scandinavia, as well as its Baltic Trade service, which connects Hanko in Finland and St Petersburg in Russia.