Europe conference: How to solve a problem like complexity 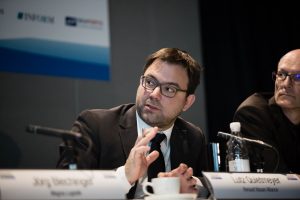 Managing logistics is increasingly complex for manufacturers, with an ever-growing number of parts to manage, spread across longer geographies with more ramp up and launches to balance.

At the 2016 Automotive Logistics Europe conference, Jörg Blechinger, director of Magna Logistics Europe, explained that the tier suppliers has gone from having 65 European plants in 2005 to 114 in 2016. It has also gone from having 60,000 active parts to 170,000 in the same period; and transport has also grown overall, as the company has gone from moving 18,000 conveynces per week a decade ago, to 40,000 per week last year.

Just to give an example of the complexity, Magna faces up to 2,000 variants of bumpers alone. Each of those variants has to be labelled, placed and distributed correctly. That is a lot of complexity to manage and that is just for one company.

Another example is the Renault Nissan Alliance, which has increasingly integrated its logistics and supply chain, with cross production across the two brands as well as other companies in the group or across its partnerships, such as Russia’s Avtovaz, in which Renault Nissan has a controlling stake, and also Daimler, with which it shares some production and platforms. Lutz Quietmeyer, general manager of inbound logistics for Renault Nissan, explained that there is a large amount of organisational complexity to manage.

For example, the Renault Group sells more powertrains and engines than it builds cars. “For parts of the vehicle, it is a key complexity for us to manage the allocation of different volumes,” Quietmeyer said.

Renault Nissan's ultimate goal is to share as many non-visible parts between vehicles as possible, and so many cars share platforms and common parts, which can also result in more cross-shipping across plants in Europe. For example, the Renault Kadjar, built in Palencia, Spain, shares a common architecture and components with the Nissan Qashqai, built in north-east England. As a result, the company has built up links for shared suppliers across both regions.

The complexity challenges faced by OEMs, suppliers and logistics companies may be varied, but the solutions can be shared. Blechinger said companies have to combine world-class manufacturing with innovation and leadership development. “You have to have the right people in place, the right capabilities, at the right time. You have to have dynamic, enthusiastic people that have broad process know-how. That's leadership development,” he said.

Along with having the right people, Blechinger explained that the key is to put everything together: IT, quality, capital, manufacturing, purchasing, material management and logistics, leadership, innovation, and professional development.

Blechinger added that software is important to help manage complexity and Magna relies on a fully integrated software system. “We have a system landscape that enables us to reduce our planning time by up to 40%. It is easier to produce strategic concepts to customers,” he said. Eventually, Magna hopes to integrate all 114 of its European plants with the system.

The next step to help Magna manage its complexity is to integrate sustainability practices into the company's planning landscape. The software will not only be able to show the amount of CO2 each process requires, but the amount of waste too, for both the internal and external supply chain. “This will help us to get a world-class, cleaner and sustainable approach. We plan to have implemented this sometime this year. We are already planning some prototypes,” Blechinger said.

Quietmeyer said the differing standards between the OEMs in the group make it difficult to standardise best practices to manage complexity. “To a certain extent we have a clear integration in our advanced planning. In regular workshops we look at what we should do in the future to integrate everyone and catch opportunities by improving visibility. We're talking about our complexity, but it's also hard for suppliers... we don't have the same standards.”

You need people to manage complexity, Blechinger concluded, illustrating his point with a Walt Disney quote. “You can design, create and build the most wonderful place in the world. But it takes people to make this dream a reality.”