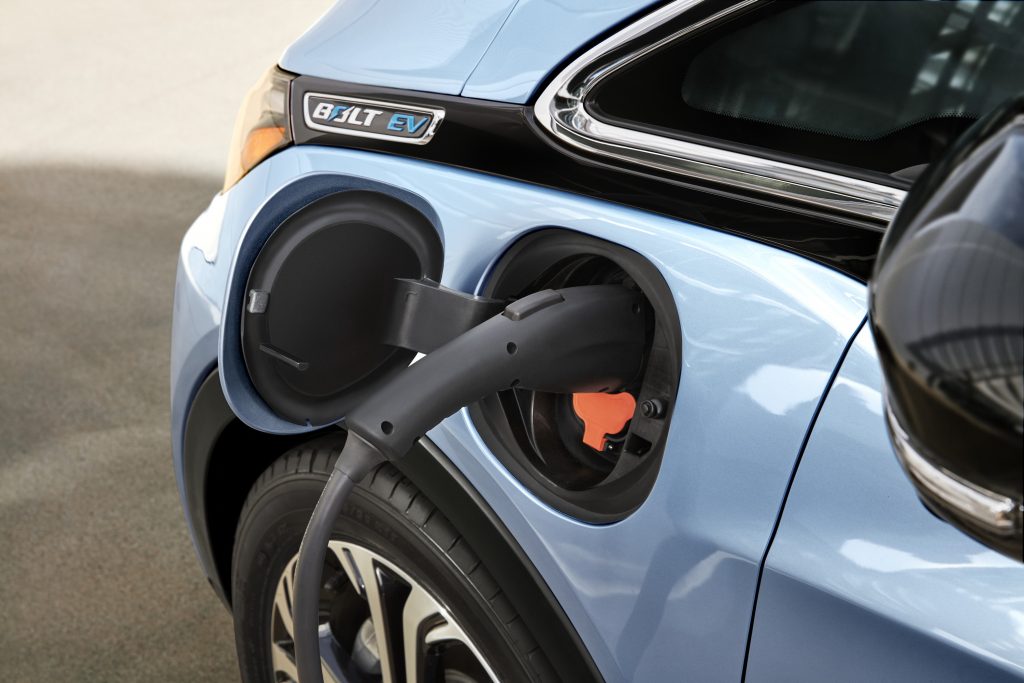 Today, electric vehicles account for only about 0.1% of the global vehicle stock and less than 1% of sales; volume growth in SUVs and trucks, while lower in percentage terms, has had a bigger impact on the market. However, if the world’s major economies are to meet climate change commitments, a large chunk of the market will need to switch over to electric propulsion. Deployment targets vary, but experts suggest the EV parc will be measured in the tens of millions by the 2020s and more than a 100m by the 2030s.

Supporting the expected level of EV growth will require profound changes across the value chain, including technology, manufacturing systems, ownership models and aftermarket support, [sta_anchor id="1"]according to professor Dr Florian Klug, a professor of logistics and business administration at Munich University of Applied Sciences in Germany and former Audi executive.

When carmakers consider EV supply chain design, says Klug, the first key question will be the one of vehicle design. “Generally, there are two contrary concepts, conversion and purpose design,” he notes. In the conversion model, the manufacturer starts with a conventional internal combustion engine vehicle and swaps out the powertrain components. Conversion is ideal for manufacturers entering the EV market, says Klug, since it keeps development costs down, and offers economies of scale for component sourcing. GM used this approach for its Chevrolet Volt plug-in hybrid, which used the company’s Delta II compact vehicle platform.

Purpose design, by contrast, involves building EV architecture from the ground up with alternative powertrain in mind. That freedom of design, says Klug, “allows more radical innovations and offers new functionalities and possibilities.” It’s the approach adopted by Tesla, and by BMW for its i-series vehicles, which also make extensive use of carbon-fibre reinforced plastics in their construction.

These changes, he says, generate value creation potential for the supply industry, as well as for logistics, including a rise in inbound freight volume. “Transport management and freight cost controlling are going to become even more important in the future,” he predicts.

[sta_anchor id="2"]The size and nature of those opportunities will depend on what carmakers buy versus what they make themselves. While powertrain has traditionally been part of critical in-house development, electric components have typically not been.

It’s all about the batteryIn EVs, the electric component that matters most is the battery. Battery technology has been the primary impediment to larger scale adoption of electric powertrains in the past, and advances in it are likely to be a differentiator in the future. An EV’s battery is both its most expensive and the heaviest single component, with implications for automotive value chains, logistics costs and supply footprints.

Battery makers, says Klug, require diverse skills, including cell-level chemistry, the complex electronics used in battery pack systems and power and thermal management software. Cell design and manufacturing expertise will be critical, however. Cells account for around the half the cost of a finished EV battery, and the details of cell design play a fundamental role in battery performance. 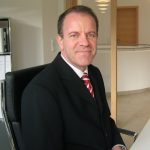 "Electronic components such as starters, alternators and fuel pumps, and their sensors are no longer needed. This, combined with longer service intervals, will induce a massive slump in the sale of spare parts," - Dr Florian Klug, Munich University of Applied Science

Carmakers have refined their expertise in the design and manufacture of IC engines over decades. Building the same level of knowhow in battery – and to a lesser extent, motor – technology will be a formidable challenge. That raises the possibility that modules that have largely been manufactured in-house could be outsourced in the future.

It’s also a transformative step that some OEMs might resist. Klug notes that many carmakers have already changed their strategies when it comes to in-vehicle software and electronics. Originally, they were happy to outsource the development of these systems to suppliers, but as electronic systems become more important to customers, carmakers have brought more development capabilities in-house.

For EVs, the tension between control of the value chain and access to knowhow could lead to a number of different models. Carmakers may choose to source from third party battery and motor and suppliers. They may acquire the necessary capabilities by buying a battery producer, or join forces with battery producers to create new, vertically integrated joint ventures.

It won’t always be established carmakers that drive the development of these new business models. The different nature of the EV industry makes it fertile ground for upstarts – like Tesla – or expansion from other sectors. China’s largest electric carmaker, BYD, started out as battery manufacturer, moving into the automotive space in 2002 with the purchase of Tsinchuan Automobile Co.

Vertical integrationThe production and supply chain strategies of today’s major EV players illustrate how carmakers are thinking about their battery strategies. Nissan, for example, is manufacturing battery packs for its electric vehicles from scratch in three facilities around the world, including a dedicated facility at its plant in Sunderland, UK.

Perhaps the biggest battery bet is that of Tesla, which commenced battery cell production this year at its $5 billion ‘Gigafactory 1’ in Nevada, US. Built in partnership with battery-maker Panasonic, Tesla claims that the plant eventually have the annual capacity to produce cells with a total storage capacity of 35 gigawatt-hours – or more than the total 2013 worldwide production of lithium-ion batteries. The company’s strategy of massive scale and tight integration is aimed at reducing the cost of battery packs for Tesla vehicles by 30%, while also ensuring sufficient availability to meet its 500,000 vehicle annual production targets (from 81,500 in 2016). 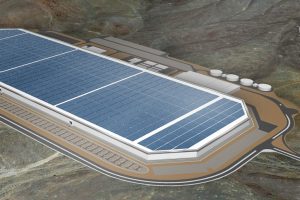 Tesla's 'Gigafactory 1' in Nevada, built in partnership with Panasonic, should help the OEM cut the cost of its vehicle battery packs by 30%

Korea’s LG Chem, for example, has started the construction of a battery plant near Wroclaw in southern Poland. The plant, scheduled to start production in the second half of 2017, will eventually have the capacity to produce more than 100,000 batteries a year. Besides South Korea, the company also has battery manufacturing facilities in China and the US.

In Hungary, Samsung SDI is converting a former TV plant 25km north of Budapest into its third global production site for EV batteries. The company also operates a battery pack assembly business in Graz, Austria, which it acquired from tier supplier Magna in 2015.

There are compelling reasons for battery production to be located close to vehicle assembly sites. Transporting expensive, heavy and potentially dangerous items long distances increases costs and risks, for example, while reducing supply chain flexibility. That might lead to the development of production models in which final assembly of batteries takes place close to assembly locations, using cells and other components produced elsewhere.

Transmission revampWhere batteries are heavy and complex, other EV components, such as motors, tend to be smaller and simpler than their IC counterparts. That has implications for supply chains, too. EV motors are likely to be more highly commoditised than IC engines, for example, with limited opportunity for manufacturers to use motor technology as a point of competitive differentiation. That could encourage outsourcing and consolidation in manufacturing, and make global supply chains easier to support.

Together, those characteristics point mainly in one direction: Asia, especially China, where a huge market and strong government support for EV technology is turning the country into a global production centre. “China has built a complete automotive value chain with a high percentage of locally produced components being incorporated into foreign cars produced the country,” notes Klug, noting that China also has “firm foundations” for a strong EV value chain, stretching from the extraction of important raw materials to final assembly activities.

Control of critical raw materials is likely to become strategically important for companies and regions seeking a major role in EV production. Lithium for batteries is an obvious area of concern, mitigated somewhat following investment in processing capacity. The material is highly recyclable and abundant in sea water, so its availability is limited largely by the capacity of the plants required to extract and process it. Philadelphia-based FMC, one of the world’s major producers, has announced plans to double its production to 8,000 tonnes in 2017, for example.

Access to other materials may more troublesome. In February, the Financial Times reported that commodities traders were building stockpiles of cobalt, aiming to capitalise on rising demand from EV battery producers. Almost all commercial cobalt supply currently comes from mines in the troubled Democratic Republic of Congo.

Aftermarket and end-of-lifeEVs and alternative powertrains will transform other supply chains, too, from charging infrastructure to electricity distribution systems. Facilities that process very large numbers of vehicles, for example – like ports and other key nodes in the finished vehicle supply chain – may face challenges installing appropriate infrastructure and adapting processes to accommodate charging cycles where required.

Aftermarket parts supply chains, meanwhile, face severe disruption. “Spare parts like exhaust systems are obsolete in e-cars. Furthermore, electronic components such as starters, alternators and fuel pumps, and their sensors are no longer needed,” says Klug. “This, combined with longer service intervals, will induce a massive slump in the sale of spare parts, which reduces the profit margins in the spare parts business.” 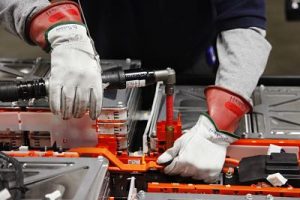 Battery packs are assembled at the Nissan plant in Smyrna, Tennessee

Batteries, on the other hand, will create aftermarket logistics challenges. The fast pace of battery technology development means the shape and scale of these challenges is unclear, but today’s batteries are not expected to last as long as the vehicles they power. That requires a system for the distribution and installation of replacement units, and a plan to deal with the millions of used batteries coming back from customers.

The industry is already experimenting in the search for solutions. Daimler is building a grid connected battery storage facility in Hannover, for example. The 15Mwh facility will hold 3,000 aftermarket battery units destined for its Smart electric vehicles and will be connected to the local energy grid, helping to smooth demand peaks and troughs. Lithium-ion batteries need to undergo regular charge and discharge cycles while in storage to maintain performance, and the new facility provides a convenient way to achieve this. The company is also experimenting with similar grid energy storage facilities using batteries that have come back from customer vehicles. Storage density is less critical in stationary applications than in transpor, and batteries that are no longer suitable for vehicles may have several years of useful life in applications like these.

Eventually, however, batteries will need to be recycled to reduce potentially dangerous and polluting waste, and to recover valuable raw materials. The reuse of such materials is expected to become an important hedge against future fluctuations in the price of lithium and other critical materials.

But reverse logistics for recycling will create another set of supply chain challenges. Carmakers and battery producers will have to trade off the economies of scale of large, centralised recycling facilities against the logistics cost required to ship dead batteries to them. Today’s lack of standardisation in cell chemistry and battery pack design also make centralised recycling more challenging. That might encourage the development of smaller facilities located closer to the point of use, but it will be hard to operate such plants in a safe, non-polluting manner.

The automotive industry has become adept at reconfiguring its supply chains to suit fast changing markets and capture cost-saving opportunities. The shift to electric propulsion is likely to test that capability like never before.